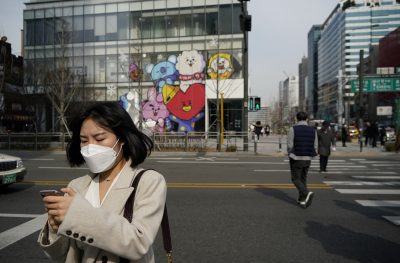 The election victory was partly a matter of luck. Moon’s leadership began to shine during the COVID-19 crisis, especially by swaying public opinion toward his administration’s all-out campaign for pandemic management. Until then, he had faced a lame-duck situation, with a record-low public approval rating of 39 per cent, partly due to the Cho Kuk scandal. He presided over South Korea’s slowest economic growth in decades and stalled nuclear talks with North Korea. Further, the initial South Korean COVID-19 outbreak was, at the time, the worst outside China, prompting over 1.4 million South Koreans to sign an online petition demanding Moon’s impeachment. The initial COVID-19 outbreak also had 181 countries impose either entry exclusions or restrictions on people from South Korea.

The successful management of COVID-19 was led by the Director of the Korea Centers for Disease Control and Prevention Jung Eun-kyeong, now dubbed a national hero. Off the back of this success, President Moon moved to reset his national management by endorsing a massive economic stimulus package, the Korean New Deal, to create jobs for the post-COVID-19 economic recovery. By stressing the government’s plan to expand the country’s digital infrastructure, Moon claimed that South Korea would become the ‘safest and most transparent production base in the world’.

Three key factors underpin South Korea’s successful management of COVID-19. The first factor is the government’s proactive response. Past experience with public health crises and lessons learnt in dealing with them underpinned this response.

In 2015, the outbreak of the Middle East Respiratory Syndrome (MERS) resulted in 38 deaths. Former president Park Geun-hye’s slow response and lack of transparency regarding the outbreak, in particular, shocked the South Korean public. This national trauma prompted the government to redraft many of its infectious disease prevention laws and public health policy, focussing on early testing, contact tracing and isolating infectious individuals. Overall, 97 per cent of South Korean citizens have health insurance, covered largely by a universal health safety net provided by the country’s health care system.

The collective trauma of the MERS and 2003 Severe Acute Respiratory Syndrome outbreaks meant the public at large readily accepted the government’s quarantine measures and related laws through the frame of civic duty.

The third and arguably the most notable factor underpinning South Korea’s praised COVID-19 response is national public health cooperation. The collective role played by and the cooperation between medical workers and health care communities, in both private and public sector medical institutions, was integral to the response to COVID-19. This created a sense of the ‘power of social solidarity’ in the country.

Still South Korea has not defeated COVID-19 and many policy challenges remain. Sporadic recurrences of newly confirmed cases and deaths continue to increase.

Other challenges facing South Korea — despite Moon’s pandemic-induced Korean New Deal — have just begun. There will be difficulties for the government in making South Korea a true digital technology and health care powerhouse. This bold new plan requires greater investment in not only the expansion of digital data infrastructure but also in complex public health infrastructure, including lab hardware and technicians to analyse samples, logistics for moving goods and pandemic control specialists. Other experts will also be required for developing and applying improved ICT capability to ensure the timely provision of medical supplies and the rapid recording and communication of relevant data.

Moon’s bold Korean New Deal plan requires his administration to effect real change through its long-promised reforms to make South Korean society fairer, more equal and more prosperous. This will ultimately pave the way for South Korea to become a global technology and health care powerhouse for decades to come.

But the problem is not just how to find the necessary financial resources to fund new policy initiatives but also to find the public support needed to implement this ambitious plan. As Moon has only two years remaining in office, with the expected 2022 presidential election rapidly approaching his administration runs the risk of ending up with empty promises and no policy follow-through. To succeed the Moon government must secure public support by realising tangible changes in post-COVID-19 reform of human security.

Hyung-A Kim is Associate Professor of Korean Politics at the School of Culture, History and Language, The Australian National University.