The international trading system was under attack even before the COVID-19 crisis. The pandemic has intensified the combat by challenging confidence in the global system. It has made the world acutely aware of the inequality and inefficiency that exists not just in economics, but also in disease management and treatment. 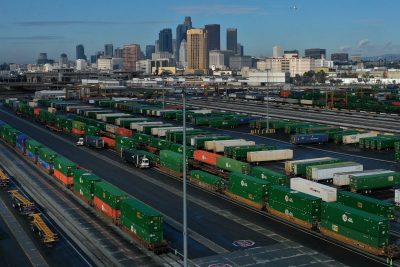 The pandemic has brought attention to the acute problems associated with supplying large quantities of medicine and equipment under crisis conditions. While there are many valid critiques of the global economic order, some of the market’s solutions are neither wise nor just. In the rush to reject the market there is a risk that good babies will be tossed out with murky bathwater.

The advantages of global free trade can be preserved while these deficiencies are corrected. Progressives in North America are inclined to be gravely suspicious of the free trade system. They see it as a major mechanism for losing jobs. There is considerable truth to this — the drive for profits leads to the export of manufacturing jobs to lower wage countries, as seen in the movement of manufacturing from the United States to China.

As one study exploring China’s economic rise highlights, while trade generally does not lead to an overall net job loss — there are true gains to be made for consumers and workers from international trade — it leads to concentrated job losses and injury in specific sectors and localities. This process has been going on for some time, well before the arrival of Chinese goods. Manufacturing has long been shifting to lower-cost and non-union labour in the south of the United States and elsewhere overseas.

Offshoring production to China has contributed to the shortage of medical equipment and supplies as they have become caught up in the two countries’ trade and political disputes. But this critique overlooks the unprecedented demand for these supplies during a pandemic. In normal times, importation has not led to supply gaps. Had production been in the United States rather than overseas, output and production capacity could just meet regular demand. The modern economy is not built on a system of excess capacity, but quite the opposite.

The modern economy is designed to maximise efficiency through just-in-time production. Originating from Japan, this system is based upon a brilliant, efficient idea: don’t buy more goods than necessary on a short-term basis, so money isn’t lost on idle inventory. It prevents the build-up of unneeded goods in warehouses. In Japan it enabled lower batch production which helped the correction of errors. Searching for the cheapest production inputs leads to better prices for consumers, provided they have jobs.

Still, efficiency is not the only utility function. Society, and therefore the economy, also needs security, stability and equity. Most advanced economies have realised that universal healthcare is essential. Sick people hurt everybody. All advanced economies except the United States provide government backing for healthcare for all. Most Americans would like to see the same thing.

Even if the United States had universal healthcare and produced vital materials at home, the supply situation could not cope with large-scale emergencies. The solution is to build up protection elsewhere in the system. Medical supplies require warehouses and the institutions to maintain stockpiles. No private sector will build stockpiles even if production were at home. The United States would need an institution monitored by legislatures and the press to keep it functioning well.  The United States has a Strategic Petroleum Reserve. Why not a publicly and transparently managed ‘Strategic Health Reserve’?

The current health emergency has revealed how frayed labour protection is, especially in the United States. But rather than ending trade altogether, there needs to be a focus on specific areas that need correction. We need better balance in the distribution of benefits of trade. The COVID-19 crisis has demonstrated the vital role of workers at the bottom of the wage chain — those who clean hospitals, make deliveries and drive ambulances. The economy has many participants all of whom deserve protection.

The evils of the trading system are connected to evils in taxation, regulation and spending. Tax loopholes and absurd rates distribute the benefits of trade to very few. But some of the gains from trade can be used to invest in public goods everyone would benefit from.

Everyone in today’s society needs access to computers and the internet. These need to be provided to every household as they are essential for education and jobs. Those who are better-educated have been able to work remotely, but if everyone had access, more less-skilled jobs, like phone banking, could be moved home as well. Greater investment in transportation and developing open spaces would allow everyone in society to enjoy the outdoors more safely. Universal childcare is essential as people return to work while the schools remain closed.

This model already exists — Scandinavian countries combine free trade with support for the whole population, not just for those who happen to work in the industries that benefit from trade. The benefits from the efficiencies of trade are distributed more justly and efficiently.

Progressives don’t have to condemn trade. Regardless of politics, we have to learn, adjust and change. The coronavirus pandemic has exposed many deficiencies in the distribution of income and access to services. Blaming China and other countries deflects attention from fixing those problems. Abandoning the advantages of trade will not correct them. The next pandemic will require substantial investment in a strong public health system, as well as specific pandemic-preparedness measures like public funding of excess hospital capacity and monitored stockpiles of medical supplies.

Peter Gourevitch is Distinguished Professor Emeritus and founding dean of the School of Global Policy and Strategy, The University of California San Diego.