The Philippines is at a critical juncture in its economic and political development. The economy continues to grow strongly after an unprecedented 74 quarters of continuous growth. It is now the fastest growing ASEAN economy.

But the politics are hard to read. Should the world take Philippine President Rodrigo Duterte at his word when he tells audiences not to take his ‘preposterous statements’ literally? For how much longer will the shocking extra-judicial killings — which have been overseen by a police force with suspect human rights credentials — continue? What are the ramifications of the bloody five-month Marawi insurgency? Could there be another such event? How likely is the country to return to authoritarian and volatile politics as many Filipinos fear? 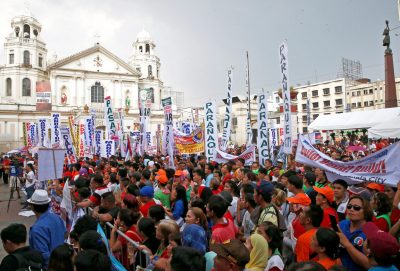 The country’s economic dynamism is no accident. It has its origins in the painful lessons learnt from the country’s deep economic and political crises in the mid-1980s. A new macroeconomic policy framework was forged that has essentially ‘crisis-proofed’ the economy through the establishment of an effective central bank, namely the Bangko Sentral ng Pilipinas (BSP). This ended the country’s boom-and-bust economic trajectory — the country has not experienced an economic crisis since the BSP was created in 1992. Further, the Philippines has navigated the Asian and global financial crises quite effectively. Since 2000, its economy has kept pace with its two traditional comparators, Indonesia and Thailand.

Trade and microeconomic reforms have proceeded apace, albeit slower than the reformers would want. The country continues to have a (shrinking) educational advantage, and its population has widespread English proficiency. As a result, it has been swept along by the revolution in globally traded back-office services, in which it now ranks second to India among Asian developing countries. The country’s business process outsourcing industry is booming — it accounts for about 7 per cent of GDP and provides one million relatively well remunerated jobs.

Duterte’s economics team is a strong one, and it has essentially maintained the policy settings of the successful Aquino administration. The country’s high levels of market concentration are for the first time in the country’s history subject to serious scrutiny by the recently established Philippine Competition Commission. The country’s severe infrastructure deficit is now being addressed, and it will be addressed faster still if the pending fiscal bills are passed by Congress and if the administration is able to reach a (controversial) de facto settlement with China over the South China Sea.

Both inter-household and inter-regional inequality remain deep-seated, and thus the pace of poverty reduction is frustratingly slow even during these periods of strong economic growth. But the administration is maintaining the successful cash transfers program, which is needs-based and conditional on children remaining in school.

Internationally, President Duterte is frequently compared to President Trump. But closer to home there is a more apt analogy — namely Indonesia’s President Jokowi. Their personal styles and persona could hardly be more different: the reserved, cautious, understated Jokowi and the swaggering, flamboyant, occasionally vulgar Duterte. But digging deeper, the similarities are striking. They are both highly successful city mayors, instinctively ‘can do’ politicians, impatient with bureaucracy, nationalist in outlook and outsiders on the national stage with limited interest in international affairs.

Both have shown they are political winners: Indonesia and the Philippines are two of ASEAN’s most democratic and politically contestable states. Both leaders are pragmatic economic managers as revealed by their choice of able finance ministers and central bank governors. Both are finding that running sprawling archipelagos in a complex world, managing the macroeconomy in an era of uncertainty, navigating the rise of China and their myriad other issues are infinitely more complex than running a city.

Both are likely to be in office for some time — Jokowi will likely be in power until 2024 (the odds still favour a second term) and Duterte until 2022. Together they preside over 60 per cent of the ASEAN population, and they will increasingly shape the region’s geo-strategic and commercial directions.

The Duterte administration is now approaching the first quarter of its single six-year term. Thus far, the economic momentum is being maintained. But the country is at a crossroads. The central question is whether the country’s economy and politics will remain delinked.

Duterte’s popularity remains buoyant, though it is beginning to slip. Unhappiness with the extra-judicial killings is rising, especially as the victims are overwhelmingly from his lower socio-economic support bases. Rebuilding Marawi and restoring hope for the more than half a million internally displaced persons will be massive challenges, and will partly determine whether his political support stays as strong as the Philippines’ economic growth.

Hal Hill is the HW Arndt Professor of Southeast Asian Economics at The Australian National University and connected to the ANU Philippines Project. With Ramon Clarete and Emmanuel Esguerra he is co-editor of The Philippine Economy: No Longer the East Asian Exception?, Institute of Southeast Asian Studies, forthcoming.