Nepal is situated in a geostrategic location between two big and powerful states. Historically, Nepal’s foreign policy has focussed on maintaining a balanced relationship with its neighbours. Modern Nepal’s founder, the late King Prithvi Narayan Shah, once remarked that Nepal was a ‘yam between two boulders’. 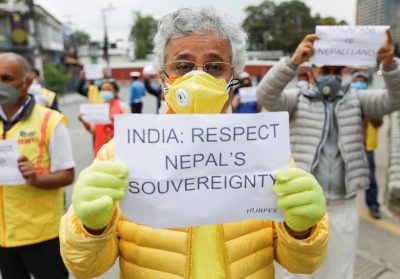 Small states are often characterised by limitations in their foreign policy behaviour. In addition to Nepal’s size, it is also landlocked and economically dependent on India.

But in spite of multi-dimensional ties, the relationship is bittersweet. The cause from Nepal’s perspective lies in India’s historic treatment of Nepal as its subordinate. The bilateral relationship between Nepal and India reached its lowest after the 2015 economic blockade. This was a result of India’s hegemonic assertion over Nepal’s new constitution that was promulgated in September 2015. Contrary to India’s expectations, the move fuelled anti-India sentiment in Nepal.

The countries are embroiled in another border dispute. India inaugurated a strategically important link road through to Lipulekh on 8 May to trade with Tibet and for pilgrimage to the sacred Kailash Mansarovar. In response, Nepal published a new political map on 20 May encompassing the areas of Limpiyadhura, Kalapani and Lipulekh. These territories have historically been claimed by Nepal but remain under India’s control after the 1962 Sino-Indian War.

Nepal’s decision to publish a new political map riled the Indian establishment. While Nepal has proposed early talks over the issue, India has urged Nepal to create a positive and constructive environment for dialogue. Both countries should sit for a dialogue to find a lasting solution. But this seems unlikely as Indian Prime Minister Narendra Modi has not shown any interest in commenting on the issue. Moreover, Nepalese Prime Minister KP Sharma Oli’s statement on 28 June that India was hatching plots to oust him has further led to the deterioration of ties.

India has also not accepted the 2016 India–Nepal Eminent Persons Group report which recommended ways to improve India–Nepal relations. The report provided significant recommendations for improving the bilateral relationship, but it has fallen on the deaf ears of the Indian leadership.

One of the biggest factors conditioning the minds of Indian policymakers is the habit of equating China with every political action taken by Nepal. Indian Army Chief General Manoj Naravane controversially suggested that Nepal had raised the border issue at the behest of China. Such an outlook will create misunderstandings and will not help build trust. Until India treats Nepal more like it treats Bhutan, the bilateral relationship will not be as productive as it could be.

Nepal and China’s relationship dates back to the fifth century. The growing influence of China in Nepal has eroded the stranglehold that India once enjoyed. Nepal is a signatory to the Belt and Road Initiative (BRI). Nine projects — mainly related to connectivity infrastructure and hydropower — have been identified for implementation under the BRI. Despite the fanfare surrounding Nepal’s participation in the BRI, progress on financing modalities and long-term viability have not been made for any of the projects.

Nepal’s foreign policy with respect to China sets its bearings according to the ‘One-China’ policy. China’s main concern in Nepal is the involvement of more than 20,000 Tibetan refugees in anti-China activities related to the Free Tibet movement. Nepal’s significance in the strategic calculus of China has increased after the monarchy was abolished and a republic was established in 2008.

Chinese President Xi Jinping visited Nepal in October 2019 becoming the first Chinese president to visit Nepal in 23 years. He declared China would help Nepal become a land-linked state. The joint statement issued at the end of his visit mentioned that both countries had agreed to elevate the bilateral relationship to a ‘strategic partnership of cooperation featuring ever-lasting friendship for development and prosperity’. This could be a significant shift in China–Nepal relations considering both countries are ruled by communist parties.

Every Chinese leader since Mao Zedong has reiterated that Nepal–China relations would be based on the five principles of peaceful coexistence with an emphasis on non-interference in the internal affairs of Nepal. China has been more involved in enhancing its clout in Nepal through soft power and economic diplomacy. Yet recent incidents like the condemnation of a media house by the Chinese embassy for republishing an article on China’s COVID-19 response along with a photo of Mao wearing a mask suggest Beijing is getting involved in Nepal’s politics.

Nepal will have to ensure its foreign policy serves its national interests in a complex geopolitical environment. Both India and China realise that stability in Nepal is important for national security. Nepal’s path to economic prosperity will be best served if it maintains a cooperative relationship with both its neighbours. Its historical and unwavering faith in the principles of non-alignment serves as a beacon in its desire to seek amity with all and enmity with none.