On 2 July 2020, India’s Ministry of Health announced 226,947 active cases of COVID-19, with 17,400 lives lost. India is unfortunately now among the world’s top five infected countries. As a country with one of the highest population densities in the world and a creaky public health system, India has experienced exponential growth in the number of infections. As a result, in addition to the health crisis, India’s economy has been brought to a standstill. 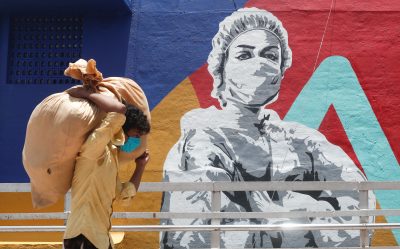 The Indian economy will suffer from significant gaps between supply and demand in almost all sectors due to disruptions caused by the virus. A recent report by CRISIL, an S&P Global company, initially reduced its GDP growth forecast for 2020 from 3.5 per cent to 1.8 per cent. After the lockdown was extended for a fourth phase until 31 May 2020, CRISIL raised the alarm by noting that the Indian economy would shrink by 5 per cent in the fiscal year 2020–21.

Investment bank Nomura estimates that the lockdown, in which all motorcycle and automobile manufacturers have stopped production until further notice, would cost India about 8.5 per cent of GDP.

This pessimistic outlook largely stems from supply and demand shocks resulting from the lockdown. But while the Indian government is prioritising public health over protecting livelihoods, it is just as critical to support India’s hardest-hit communities, namely workers in the informal sector.

India’s informal sector often cushions the impact of India’s economic shifts. But it is unlikely to do the same this time due to the severe restrictions placed on the movement of people, goods and services within India and across the borders. Most informal sector workers are migrants from rural areas both within and outside the states.

There is no official data for inter-state migrants. Using the National Sample Survey (NSS) data drawn on the 2011 Census, it is estimated that there are 65 million inter-state migrants, of whom about 8 million workers are employed as casuals and another 8 million workers are employed on a regular basis in the informal sector. The remaining migrants work in the formal sector including the banking and IT sectors.

The lockdown has left migrant workers in the informal sector unemployed for over two months. With no support from their employers during the lockdown, the onus lies with state and central governments to protect these migrant workers.

The central government announced on 12 May 2020 its second stimulus package of Rs 20 trillion (US$264.9 billion), which is 10 per cent of India’s GDP. The package focusses primarily on liquidity injections. Between April and June, roughly 800 million people are receiving 5 kilograms of wheat or rice and 1 kilogram of pulses each month free of charge. This is in addition to the existing free monthly supply of 5 kilograms of wheat or rice under the Pradhan Mantri Garib Kalyan Yojana scheme.

In terms of cash transfers, 200 million women with bank accounts will receive a monthly payment of Rs 500 (US$6.6) until June, 30 million elderly citizens, widows and those with disabilities will receive Rs 1000 (US$13.2) and 87 million farmers will receive Rs 6000 (US$79.1). The size of this stimulus package could be increased to be more effective.

In addition to this support for the poor, many political parties, philanthropists and non-governmental organisations have distributed cash, rice and basic groceries to those who lost their jobs due to the lockdown.

In terms of liquidity measures, the Reserve Bank of India (RBI) has reduced the repo rate (the rate at which central banks lend short-term funds to commercial banks) by 75 basis points to 4.4 per cent. A three-month extension on loan equated monthly instalments was announced on 27 March.

Despite the Indian government’s financial aid packages, given the lengthy period of the lockdown, which is currently extended to the end of June, the package does not sufficiently address India’s distressed labour force.

To stimulate consumption, the government should increase the fiscal component of its stimulus packages by increasing cash payments to all those who were unemployed during the lockdown in urban areas. Besides increasing the cash payments, special attention should be given to the micro and small-scale industries in the stimulus package, which is currently lacking. The Mahatma Gandhi National Rural Employment Guarantee Act should be doubled to 200 days of employment for the rural poor. The minimum support prices for rice and wheat revised further up from the 2019–2020 prices. These will increase the urban and rural incomes respectively and drive urban and rural consumption. Most importantly, it is imperative to speed up the distribution of package benefits for those people it is intended to reach. To do this, the Ministry of Finance needs to set up and monitor individual committees in each state.

A gradual easing of lockdown measures has been implemented to reduce the incidence of poverty, particularly among the poorer sections of India’s population. Future success will depend on whether the government, businesses, educational institutes and citizens can work together to implement the policies and procedures outlined by national leaders. Evidence so far suggests that a majority of the population has been cooperating with the policymakersdespite the difficulty of maintaining social distance, for example, for India’s urban poor.

Kaliappa Kalirajan is Professor of Economics at the Crawford School of Public Policy, The Australian National University.