Vietnam has been one of Asia’s most successful nations in dealing with the COVID-19 pandemic. Its first confirmed case was announced on 23 January, at the same time as France. After two and a half months, France is struggling with nearly 140,000 cases and 15,000 fatalities, while Vietnam — bordering China and having extensive economic relations with it — has uncovered fewer than 300 cases, with no deaths. But this success is coming at a cost. 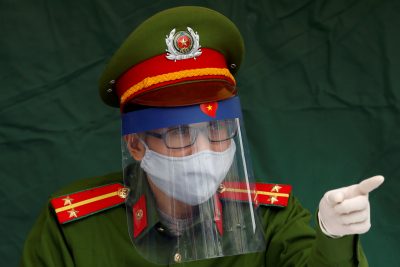 Vietnam was among the first countries to impose strict containment methods, even when COVID-19 was still confined within China. By mobilising available resources for quarantining and contact tracing, Hanoi hoped to crush the pandemic early — as it had done with SARS and H5N1 — and prevent overcrowding its under-equipped health system.

By the time Vietnamese Prime Minister Nguyen Xuan Phuc officially announced a national lockdown on 31 March, life had already been halted for two months. The economic consequences are still being felt. GDP growth in the first quarter of 2020 was the lowest in 11 years at just 3.82 per cent. Vietnam cannot now achieve its growth target of 6.8 per cent. For a country with a young working force and a population of nearly 100 million, this will have tremendous social and economic impacts.

As a trade-dependent country, Vietnam is vulnerable to supply and demand shocks. Disruptions in East Asian supply chains are causing a shortage of inputs in the manufacturing industry. Vietnam imports input materials from China, South Korea and Japan for their domestic firms and companies such as Samsung and Foxconn.

As countries close borders and apply strict control measures amid the prospect of another global recession, Vietnam’s export sector is also having a hard time. The flagship garment and textile businesses that generate income for nearly 12 per cent of the Vietnamese population have received notices from their biggest markets — the United States and the European Union — for a temporary suspension of imports for three weeks to one month.

As the pandemic wreaks havoc in the United States, manufacturers and workers in Vietnam are feeling the effects. The US market contributes US$15 billion in export value and accounts for 45 per cent of Vietnam’s total garment and textile exports. In the agricultural sector and services industry, the halt of virtually all activities is taking a toll on Vietnam’s vibrant economy.

More than 30,000 enterprises stopped their business temporarily or permanently in the first quarter of 2020. For the ones still operating, the government has proposed economic incentives including tax breaks of up to US$2 billion and a credit package of more than US$11 billion. How effective these measures will be remains to be seen.

Still, Vietnam may get out of the pandemic in better shape than others. Despite the expected growth rate decreasing to 4.9 per cent in 2020, it is among the few economies in the Asia Pacific — and perhaps in the world — that still have positive growth rates. The Asian Development Bank, while predicting the country’s sharp decrease in GDP growth, said that the Vietnamese economy remains ‘uniquely robust’ in the subregion. Sharply decreased oil prices — despite a greater burden on Vietnam’s strained budget — give Vietnamese policymakers room for monetary and fiscal stimulus as inflation concerns fade away.

Vietnam’s success in curbing the pandemic might attract foreign investors, as will its traditional advantages of cheap labour, political stability, and proximity to China. Samsung, which already bases half of its global production of mobile phones in Vietnam, shifted part of its domestic phone production there after the outbreak in South Korea. Social distancing is also helping accelerate the country’s transformation to a digital economy, which is considered by the government as a pillar of sustainable growth.

The COVID-19 pandemic also affected Hanoi’s international agenda in 2020, when the country started its non-permanent membership of the United Nations Security Council and its chairmanship of ASEAN. Hanoi planned to use these opportunities to exert influence on issues such as the South China Sea dispute. But as countries are busy dealing with the pandemic, Vietnam cannot conduct activities with these institutions as hoped. There have even been calls from experts in Hanoi to ask for an extension of Vietnam’s ASEAN chairmanship for another year.

Yet danger comes with opportunities. If Vietnam emerges from the pandemic strongly, it can take this chance to further ASEAN countries’ coordination in solving their shared concerns.

The pandemic broke out a year before the 13th Vietnamese Communist Party (VCP) National Congress is due to be held in January 2021. If the government can get Vietnam out of the pandemic with ease, senior officials might be rewarded with promotions to higher posts. These include Prime Minister Nguyen Xuan Phuc, who is the candidate for the VCP’s Secretary General post, and Vice Prime Minister Vu Duc Dam, who hopes to get promoted to the Politburo. Wide public support for the government responses might help. An opinion survey revealed that 62 per cent of Vietnamese respondents think the government is responding to COVID-19 well — the highest among 45 surveyed countries.

But that judgement might yet be reserved for the future. There is no illusion among the Vietnamese leadership that the ‘war against the virus’ — in the words of Phuc — will soon be over.

Nguyen Khac Giang is a senior research fellow at the Vietnam Institute for Economic and Policy Research (VEPR), Vietnam National University, and a PhD candidate at Victoria University of Wellington.