As the dust settles from the Chinese Communist Party’s 19th Congress, one of the strongest edifices left standing is Xi Jinping’s signature foreign policy initiative — the US$1 trillion Belt and Road Initiative (BRI). Two members of the BRI Leading Small Group, Wang Hunning and Wang Yang, secured five-year positions on the reshuffled Politburo Standing Committee. The BRI even received an awkward mention in the revised Party Constitution. 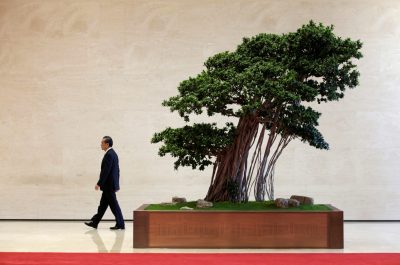 The BRI generates political influence through ‘connectivity power’ — the influence a central government accrues through infrastructure projects that connect its domestic periphery and neighboring states to the central core economy. Three types of infrastructure projects are most likely to generate connectivity power: transportation (roads, railways and ports), communication (cellular networks and internet cables) and energy (oil and gas pipelines, hydropower dams as well as electrical lines and grids).

Within these projects, China’s connectivity power is likely to emerge through four mechanisms.

First, and most directly, new infrastructure projects should bolster the flow of people, goods, capital and energy. Since the BRI is essentially a promise for a US$1 trillion state-backed investment surge, capital flows in particular are likely to yield an ‘early harvest’.

The BRI already appears to be stimulating additional investment, as more Chinese investors take a stake in firms in BRI recipient countries, perhaps in the expectation that they will receive easier access to BRI-earmarked capital or can capitalise upon Beijing’s efforts to boost exports from BRI-recipient countries. By August 2017, the value of Chinese mergers and acquisitions in the 68 countries officially participating in the BRI already totalled US$33 billion, surpassing the US$31 billion tally for all of 2016.

Trade patterns are less likely to change dramatically, since China already represents the most important source of imports for about three quarters of BRI countries and is the most important trading partner for just under half of them. Yet even in trade the BRI’s impact is emerging. China’s trade with BRI countries in the first half of 2017 rose four per cent faster than China’s overall foreign trade. Standouts include Russia, Pakistan, Poland and Kazakhstan — all key players along the new Silk Road.

As new energy projects come on line they will also begin to reshape energy flows. For instance, the Kyaukphyu–Kunming natural gas and oil pipelines across Myanmar and into Yunnan province enable Beijing both to diversify its energy sources and to tighten economic interdependence with Naypyidaw.

Second, connectivity projects help put China at the centre of a thickening web of linkages, bolstering Beijing’s capacity to set the standards by which trans-border networks operate. China’s high-speed trains and ultra-high voltage electrical lines, for instance, will likely shape regional standards as they begin to stretch beyond China’s borders.

In China’s bid for global influence, currency may well be the most significant standard it can aim to reset. Over half of the 35 economies that have signed currency deals with China are in the BRI. Of the 68 BRI countries, one third now have direct access to the Chinese renminbi (RMB) from their own banks. Economists confirm that easy access to the RMB promotes trade with China. Mongolia is a prime example. Almost 90 per cent of its exports go to and one third of its imports come from China. In 2014, Ulaanbataar signed a 15 billion RMB (US$2.2 billion) currency swap agreement with China, which was extended for another three years in July 2017.

Connectivity power can also extend into institutions. Established multilateral development institutions, such as the Asian Development Bank, may incorporate Chinese-backed projects. For instance, the World Bank funded the Kazakhstan stretch of the Western Europe–Western China Highway, which will now serve as the main roadway of the BRI’s central corridor. But such synergy can cut both ways — the involvement of Western financial institutions might dilute Beijing’s influence over the terms of lending, or they may help legitimise and amplify China’s model of infrastructure-led development.

Further, while extending massive loans may initially bolster Beijing’s influence, leverage shifts to the host country once the project is underway, as was starkly evident in the case of the Myitsone Dam in Myanmar. Since Myanmar’s leadership bowed to public pressure and froze the massive project in 2011, Chinese investors and officials have been unable to compel a policy reversal or even secure compensation.

Increased connectivity also facilitates factors of instability. Guns and drugs are smuggled into China through burgeoning trade routes. Beijing has long been wary of engagement between its Muslim-dominated provinces — Xinjiang and Ningxia — and the Muslim world in Central Asia and the Middle East due to fears of importing instability.

As Deng Xiaoping warned decades ago, ‘when you open the window, a few flies will come in’. Like Deng, Xi Jinping appears eager to take this risk.

Evelyn Goh is the Shedden Professor of Strategic Policy Studies at the Strategic and Defence Studies Centre, The Australian National University. James Reilly is an Associate Professor at the Department of Government and International Relations at the University of Sydney.

This article appeared in the most recent edition of East Asia Forum Quarterly, ‘China’s influence’.