Ankara and Beijing are quickly becoming friends. Between souring discourse with the European Union, differing views on Syria and accusations of human rights abuses, Turkey’s formerly strong ties with NATO (its security benefactor) and Germany (its biggest export partner) have chilled.

Amid this fallout, the Turkish Foreign Minister promised in August to eliminate any anti-Chinese media reports in Turkey, stating ‘we see China’s security as our security’. In May, Turkish President Recep Tayyip Erdogan attended the Belt and Road Initiative (BRI) Forum in Beijing.

This emergent relationship reveals the shared interests of China and Turkey as well as Beijing’s knack for picking out nations who are looking for alternatives to the West. 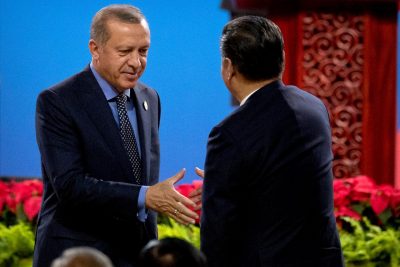 China has marketed the BRI as a string of economic projects along the historical Silk Road that passes from Asia through Turkey into Europe. It offers immense opportunities to cash-strapped Central Asian governments whose leaders are less enthusiastic about ‘liberalisation’ than they are about projects underwritten by the world’s second largest economy.

One of those leaders is Turkey’s President Erdogan and his country’s ‘Eurasianist’ bureaucracy, who are eager to reduce Turkey’s reliance on Western institutions such as NATO and the European Union by engaging with Asia — a region where its alleged human rights abuses fall on comparatively deafer ears.

Since the end of the Cold War, Turkey has struggled to gain a foothold in Central Asia. Having to compete with Iran for influence, Turkey haphazardly fostered a shared Turkic and religious identity on which to base its regional authority. To its credit, Ankara has secured some trade and defence ties, but these remain piecemeal at best.

Ankara therefore requires a diplomatic framework through which it can expand its regional presence and hedge against its spiralling relations with the West. Further, its nationalist leaders need non-Western capital to bankroll the Turkish economy should recurring diplomatic spats with Germany endanger Turkey’s future access to the European market. Equally, Beijing is always on the lookout for another addition to its new economic architecture — especially a NATO scalp that has publicly spurned the United States.

The friendship has, to a substantial extent, already been struck. Beijing purchased a stake in Turk Telekom, a company that has been allegedly used by the Turkish government to spy on Turkish citizens and regime opponents. High-speed rail, ports and other infrastructure projects have all been lined up. The BRI will also assist Ankara in promoting its construction industry in Central Asia, where Turkish firms have been operating since the 1990s.

In 2013, China successfully bid to develop a Turkish air defence system — a development that was later scrapped due to NATO pressure. The tender itself was not Beijing’s priority. More important was the political capital gained from a NATO member buying defence equipment from a geopolitical competitor.

This time around, the BRI is far less contentious than a missile defence program, so either way China wins. If NATO says nothing, it gains a friend on the border of Europe and a proponent of the BRI. If NATO countries express concern over Beijing’s outreach, this will reinforce Erdogan’s nationalist claims that the ‘West’ is trying to hem Turkey in, while Beijing can remain neutral.

The magic of the BRI is not the economic benefits it will offer Turkey or China. Rather, it is how the BRI taps into Ankara’s desperation to find alternatives to its economic and strategic partners such as Germany and the United States, and how it supports China’s desire to establish its own economic architecture. It also allows both countries to strengthen relations without sparking direct opposition from the United States. The United States and its NATO partners cannot argue against greater global trade and investment flows. They are somewhat helpless as they lose their grip on a rogue NATO ally.

Turkey–China relations are in line with Beijing’s incrementalism and non-zero sum thinking. China knows better than to throw all its eggs into pitching membership of the Shanghai Cooperation Organisation to Turkey. Instead, it will offer Turkey capital as well as limited security cooperation, both of which complement Ankara’s relationship with the United States and European Union.

But the relationship is not without issues, one of which is Turkey’s former solidarity with Uyghur separatists in China’s North East. In 2009, then prime minister Erdogan responded to riots in China involving both ethnic Han and Uyghur citizens with claims that China was committing ‘a kind of genocide’. But even then, Erdogan withdrew his remarks, and quite recently Ankara has cracked down on Uyghurs residing in Turkey, demonstrating Turkey’s readiness to compartmentalise its rhetoric in order to bolster its relationship with China.

China has also recently claimed that terrorist incidents committed by Uyghur’s in Xinjiang have been sparked from outside the country. But Beijing has never blamed Turkey for these incidents. Given that Erdogan and others rely on Pan-Islamic rhetoric for popularity within Turkey, future relations will have to grapple with this identity clash.

For Turkey, Chinese investment and cooperation is necessary to fulfil its desire for a future outside NATO’s strategic embrace and its goal to minimise its economic dependence on European states such as Germany, which have engaged in a war of words with Ankara. For China, it is an unmatched opportunity to flaunt new cooperation with a country historically moored in the NATO camp. Through the BRI, China has quietly built relations that complement — rather than call into question — Turkey’s relationship with NATO and the West.

Nicol Brodie is a research student at the ANU.