All governments are thinking hard about how they will manage economic recovery once international borders re-open after COVID-19. Australia’s Treasurer Josh Frydenberg recently rejected fiscal austerity but wants to copy other policies from the era of Thatcher and Reagan.

So which policies from this era are suitable for developed nations as they re-open their borders after COVID-19? 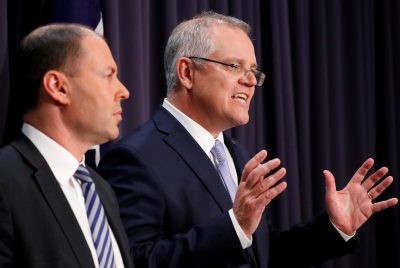 Former British prime minister Margaret Thatcher and US president Ronald Reagan did indeed reduce spending on social programs such as health, education, social welfare and housing as well as privatise many government functions. Some privatisations were successful while many were a disaster for everyone but a small number of well connected rent-seekers.

Overall, government spending as a portion of GDP went up under Reagan — and initially also under Thatcher — mainly because of their penchant for spending on defence and armaments associated with various military escapades.

Thatcher and Reagan flattened income tax scales to encourage ‘aspiration’. Apparently, people in the 1970s and 1980s would not work hard unless they had lower marginal tax rates and lower tax rates on income from capital. Lower marginal tax rates helped wealthier people build capital with the balance of income generation steadily shifting in favour of capital income over labour income.

Australia’s Howard government enthusiastically followed the lead of Thatcher and Reagan, particularly through its changes to capital gains tax policy, cutting tax on superannuation income and tax credits for franked share dividends where the company pays the tax on behalf of the shareholder.

French economist Thomas Piketty has extensively documented the rise in income inequality over the past 50 years, much of it triggered by policies in the style of Thatcher and Reagan.

In the 1970s, management guru Peter Drucker argued CEO salaries should not exceed 25 times the level of base workers in the same organisation as that would harm company morale. Today no one bats an eyelid if a CEO is paid over 100 times the salary of the base worker in the same firm. Income inequality has increased at an extraordinary rate since Thatcher and Reagan.

Suppressing the power of unions also accelerated income inequality by weakening worker bargaining power. Weaker unions — at least in Australia — have also led to regular instances of wage theft where employees are underpaid their legal entitlements across almost every sector of the economy.

Increasing consumption taxes to generate government revenue and slow growth in aggregate demand was also an objective of policy from the 1970s onwards. Thatcher argued that her poll tax was ‘fairer’ because everyone paid the same rate. This ultimately led to her demise. A lesson for politicians eager to increase any form of regressive taxes: it is both bad politics and bad policy, particularly in an environment where we know aggregate demand will be persistently weak due to population ageing.

Thatcher and Reagan enthusiastically cut ‘red tape’ to encourage private business investment and productivity over public interest protections for workers, consumers, taxpayers and the environment. Cutting company taxes was also designed to increase business investment. In recent years, this has led to many companies buying back their own shares, thereby increasing ‘shareholder value’ at the expense of public interest. With persistently weak aggregate demand, why would companies invest to increase productive capacity?

But the best known policy from this era was ‘fighting inflation first’ through tight monetary policies and ‘keeping a lid on wages’. From the late 1960s onwards, most developed nations experienced a massive increase in new workers entering the labour market as the baby boomers turned 20 and female participation rose. These young baby boomers were also forming new households, thus driving up private consumption expenditure.

The result was ‘stagflation’ where both inflation and unemployment were persistently high. The economic sage of the day, Milton Friedman, advocated tight monetary policies to tame inflation even if that meant higher levels of unemployment and regular bouts of recession.

Both Thatcher and Reagan thought reduced government borrowing would enable the private sector to borrow at lower costs and thereby increase productive capacity. But as the baby boomers have increasingly moved into retirement and below replacement fertility rates have accelerated population ageing, inflation is no longer the bogeyman. Indeed, central banks have struggled to push up inflation to their target ranges.

As the canary in the ageing coalmine, Japan has since the early 1990s — when its working age to population ratio peaked — rarely experienced inflation above 1 per cent, the rate often sitting below zero. This is despite the largest government debt to GDP ratio of any major developed economy, negative interest rates and massive levels of quantitative easing.

All developed nations, plus China and Russia, are now firmly in their demographic burden phase and this will persist for at least the next 20 years.

As John Maynard Keynes advised in 1937 — when the developed world was also ageing — the overarching policy objective should be to boost aggregate demand by reducing income and wealth inequality. This reduces excess capacity in businesses and better enables them to survive with an ageing and eventually declining population. Cutting company tax, increasing consumption tax or obsessing about repaying government debt will just send more businesses to the wall and raise unemployment.

After the COVID-19 recession, governments around the developed world — plus China and Russia — will continue to face the prospect of even greater levels of population ageing as fertility rates remain significantly below replacement levels, the bulk of the female population is past child-bearing age and anti-immigration attitudes prevail. It will be a completely different environment to the one faced by Thatcher and Reagan.

Reversing many of their legacy policies may well be the more sensible path.

Abul Rizvi is a PhD candidate on Immigration Policy at the University of Melbourne. He was a senior official in the Department of Immigration from the early 1990s to 2007 when he left as deputy secretary. He was awarded the Public Service Medal and the Centenary Medal for services to development and implementation of immigration policy, including in particular the reshaping of Australia’s intake to focus on skilled migration.