The relationship between China and India has reached a dangerous low. The recent clash between Chinese and Indian troops resulted in the deaths of at least 20 Indian soldiers and the injury of many others. The conflict took place in the Galwan River Valley in the Himalayan border region of Ladakh at the Line of Actual Control (LAC). 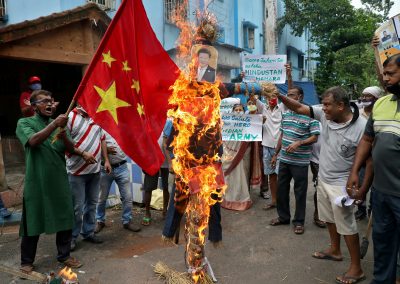 The clash was unsurprising to India and China watchers because the China–India border has been disputed since the two countries went to war in 1962. The past few years have seen increasing skirmishes but the deadliness of this incident and the subsequent speed with which both sides scrambled to hold talks to ‘cool down’ the situation marks a new level of escalation.

The ferocity of the clash threw one fact into prominent relief — there has been a historical failure on both countries’ parts to initiate a Nixonian moment in their relationship. Former US president Richard Nixon’s visit to China in 1972 transformed the China–US relationship, allowing it to grow to include commonalities beyond geopolitical rivalry. China and India have failed to take leadership in producing such a transformative moment. Nearly six decades after the Sino-Indian war, this highly consequential bilateral relationship is still predominantly defined by the border dispute.

The 1962 border war was primarily fought over two frontier territories that remain contested today. The first is the western sector which includes Aksai Chin on the western side of the India–China border, surrounded on three sides by Ladakh. The second is the eastern sector on the India–China border near Myanmar which is north of Assam and comprises the Assam Himalaya region and its foothills.

After India lost the 1962 border war, it reassessed its strategic priorities and began investing in its military. When it acquired nuclear weapons in 1998, the Indian government cited the ever-present threat posed by China. China for its part remained wary of India, but its strategic priority was the United States. Due to India’s threat perception and China’s indifference, the bilateral relationship remained fragile.

Research shows that the resilience of any bilateral relationship is a spectrum. While material exchanges such as trade or defence ties are important, they are insufficient in ensuring resilience by themselves. Richard Nixon’s historic visit to China resulted in a sea change in the resilience of US–China relations. It was not simply that the economic relationship became closely intertwined, but that the visit paved the way for ongoing political, diplomatic and cultural exchanges that provided long-term ballast for the relationship.

It led to the proliferation of Chinese-speaking experts in the United States, many of whom conducted field work in China. China similarly produced many experts on the United States. Decades of laying a foundation for the relationship has meant that even when mutual trust dips, there are influential moderate voices from experts on both sides calling for a constructive agenda.

This foundation is lacking in the China–India relationship. After the 1962 war, no Indian leader emerged who was willing to brave the deep anti-China sentiment and take steps to build a constructive relationship. Nor did any Chinese leader consider India a top priority. Bilateral trade did not take off until the early 2000s when then Indian prime minister Manmohan Singh and then Chinese president Hu Jintao took steps toward building a robust trading relationship.

China became India’s largest trading partner in 2008, and in 2015 the two countries sought to increase their bilateral trade to $US100 billion. But even though India is China’s largest trading partner in South Asia, Pakistan and Sri Lanka still receive larger amounts of Chinese foreign direct investment. India–China two-way investment remains surprisingly low and their bilateral trade target of $US100 billion remains unmet.

Development in areas that could deepen the relationship, such as people-to-people engagement, communications, expertise and civil society, remain lacking. There are still very few China experts in India. Top Indian universities do not have excellent language programs nor do they require students to receive training in Mandarin. Visiting Chinese scholars are routinely denied visas to India.

China has very few experts on India, and those they do have tend to be located in the southern provinces rather than in Beijing. One of the numerous US experts at the influential Chinese Institute for Contemporary International Relations (CICIR) recently told me that the institute had only one real India expert. There are no national political committees focusing on China in India or vice-versa. China is discussed as a constant threat in Indian newspapers, while India, if discussed at all in Chinese newspapers, is characterised by its weaknesses, poverty and corruption.

The recent border clash may have been triggered by the Chinese construction on the Indian side of the LAC. But since the two governments fundamentally disagree not only on where the historic borders lie but even on the LAC, it is hard to say precisely. The Indian media has castigated the government’s handling of the crisis and has called for the government to address the ‘inequitable’ trade relationship. Meanwhile, the strictly-controlled Chinese media has mostly ignored the incident.

The significance of the China–India relationship is ‘jaw-dropping’, yet ‘[their] understanding of the West is much greater than their knowledge of each other’. There is much space for cooperation aside from trade that could define the relationship beyond their border dispute. Water sharing, climate change, peacekeeping and even space exploration are all areas with significant potential.

But measures to expand the relationship require commitment and initiative from government leaders regarding long-term policies, including the training of country expertise, that would increase the resilience of the relationship. In the absence of such leadership, the China–India relationship is doomed to produce clashes like that recently witnessed in the Himalayas.

Manjari Chatterjee Miller is Associate Professor of International Relations at the Pardee School of Global Studies, Boston University, and a research associate at the School of Global and Area Studies, Oxford University. She is the author of Wronged by Empire: Post-Imperial Ideology and Foreign Policy in India and China (Stanford UP, 2014) and co-editor of the Routledge Handbook of China–India Relations (2020).