Governments around the world are considering how to revitalise their economies post-COVID-19. China’s plans for ‘new infrastructure’ construction projects could help deliver low-carbon economic stimulus. But spending plans at this point are small, and money continues to be poured into high-emissions ‘old’ infrastructure projects. 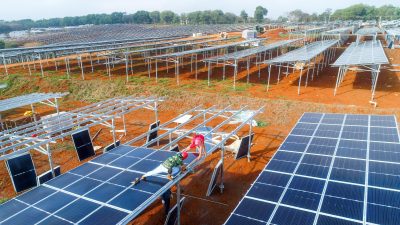 In response to the global financial crisis (GFC), China created a 4 trillion RMB (US$566 billion) stimulus package in 2009–10, covering 10 programs including affordable housing, highways, bridges and airports. The boost to traditional infrastructure sharply increased the consumption of cement and steel, resulting in higher carbon dioxide emissions and severe air pollution.

This time, a new buzzword has emerged — ‘new infrastructure construction’. The Politburo Standing Committee, which sets headline economic and political strategy, held a meeting on COVID-19 control measures in March 2020, envisioning that the route to economic recovery would be through accelerated investment in such ‘new infrastructure’ projects.

This ‘new infrastructure’ concept started as a list of information and communication technologies, but has since been expanded to include low-carbon transport and energy. It covers investment in seven fields: 5G networks, data centres, artificial intelligence, the industrial Internet of Things, ultra-high voltage (UHV) power transmission, high-speed rail and electric vehicle charging infrastructure.

The total investment anticipated for these seven fields is 10 trillion RMB (US$1.4 trillion) for the six-year period from 2020–25, easily allowing for a low-carbon stimulus package comparable in size to the one following the GFC. The suggested ‘accelerated investment’ means that these investments could be brought forward as part of a stimulus package to achieve the policy goals for these seven fields by 2025.

But the suggestion to accelerate the investment has not been backed up by central government spending yet, possibly because Beijing’s coffers are not nearly as full as they were when the GFC hit. Much of the investment will have to come from provincial level governments and by encouraging lending.

Many provincial level governments have incorporated ‘new infrastructure’ projects in their recently updated investment plans. Twenty-three provincial level governments are planning a total of 45.8 trillion RMB (US$6.5 trillion) of multi-year investments. These 23 provinces account for 89 per cent of China’s GDP, so the total for all provinces might be 51.3 trillion RMB (US$7.3 trillion) — an increase of 4.3 trillion RMB (US$609 billion), or 9 per cent, in long-term investment plans. Annual expenditure is up 7.4 per cent on average in the 14 provinces for which such data is available. These plans were drawn up as the COVID-19 crisis unfolded, so it remains unclear exactly what share of this reflects short-term stimulus spending and whether further increases will follow.

Among the new infrastructure projects, high-speed rail is the largest expenditure category, followed by 5G internet base stations and big data centres. High-speed rail can lower carbon emissions by substituting for domestic flights, though its construction still requires steel and concrete.

UHV lines are primarily intended to transport renewable electricity from wind, photovoltaics and hydropower bases in China’s northern and western regions to industrial centres in coastal provinces. IT infrastructures such as 5G and Big Data centres have low emissions intensity per unit of investment and support service industry growth, but create additional electricity demand. Just how low-carbon these investments are will therefore depend on continued greening of China’s electricity mix.

But massive investments in ‘old’ infrastructure continue. Restrictions on the construction of new coal-fired power plants were widely loosened in February 2020, perhaps in an early attempt to generate new investment. A total of 206 gigawatts (GW) of coal-fired plant capacity — requiring investment of around 1.1 trillion RMB (US$156 billion) — are in the early planning or construction stages. Such additions would be consistent with an increase of China’s current 1100 GW cap on coal-fired generation capacity to 1300 GW suggested for the upcoming 14th Five Year Plan.

It is currently still unclear whether the ‘new infrastructure’ construction projects would do much to reorient economic growth patterns in China. More will need to be done to achieve a decisively ‘green’ stimulus package overall. Beijing’s more limited capability to spend means that old-style infrastructure investment may be seen as largely sufficient for now.

Jorrit Gosens is a Research Fellow with the Energy Transition Hub at the Crawford School of Public Policy, The Australian National University (ANU), and the creator and editor of China Energy Portal.

Frank Jotzo is Professor and Director of the Centre for Climate and Energy Policy at the Crawford School of Public Policy, ANU.

An extended version of this article with derivation of investment needs is available here from the Centre for Climate and Energy Policy at the ANU Crawford School.