The bushfires now ravaging Australia’s flora, fauna and rural communities on an unprecedented scale underline the country’s exceptional vulnerability to global heating and its strong interest in global climate change mitigation and adaptation. Decarbonisation should be taken as an economic opportunity and it could elevate Australia’s leading role in Asia for years to come. 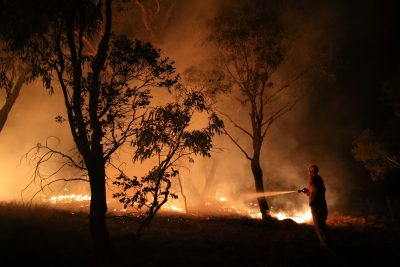 Many have recently noted that 12 years ago, the Garnaut Climate Change Review warned of high drought and fire risk to substantial parts of the country by 2020. While Australians take pride in their long run of sporting records, setting new temperature records is less appealing. The past decade was the hottest on record and Australia is heating more quickly than most. The mean temperature last December was 3.2 degrees above the 1961–1990 average.

Australia’s exceptional vulnerability to climate change implies that its optimal strategy is to lead rather than obstruct global and regional decarbonisation efforts. When announcing a AU$2 billion (US$1.38 billion) bushfire recovery fund on 6 January, Australian Prime Minister Scott Morrison pledged ‘to do whatever it takes, to do whatever it costs, […] to build our resilience for the future and to enable Australians […] to go forward in confidence for their future’.

This is welcome, but neither ‘resilience’ nor ‘confidence’ in the future will be achievable without a far more ambitious and credible climate policy pursued in concert with Australia’s partners, including those in Asia. Most Australian voters accept this need, but current policies do not reflect this preference. The government hopes that its mantra of ‘meeting and beating’ its 2015 Paris commitments on greenhouse gas emission reductions by 2030 will be sufficient. This stance looks increasingly untenable.

Many of Australia’s international partners believe that its government played a blocking role in the United Nations climate talks — the latest Conference of Parties, or ‘COP25’ — in Madrid last December. These talks came after the post-Paris process that aims to ratchet up commitments to hold ‘the increase in the global average temperature to well below 2 degrees Celsius above pre-industrial levels’ and to pursue ‘efforts to limit the temperature increase to 1.5 degrees Celsius’. Without much greater ambition, Australia and the world risk the ‘irreversible loss of the most fragile ecosystems, and crisis after crisis for the most vulnerable people and societies’.

The European Union is showing greater responsiveness to evolving scientific assessment, committing to achieving ‘net zero’ emissions by 2050. Austria’s new Conservative–Green government has pledged to do so by 2040. Yet commitments by most countries in Asia are lagging and Australia’s ‘meet and beat’ rhetoric does nothing to encourage greater regional ambition.

Australia has asserted the right to use ‘overachievement’ credits relative to its 1997 Kyoto Protocol commitments over 2008–2020 to meet its Paris commitments by 2030, but its Kyoto commitments were unusually unambitious. Allowing the use of such credits would increase the risk of much bigger potential users like China claiming them. This undermines the broader purpose of the Paris agreement to make large cuts to global emissions.

The Australian government chose to weather the inevitable international criticism in and after Madrid. Although Australia’s total emissions account for ‘only’ 1.3 per cent of the global total, Australia is a top 15 emitter and the 7th largest in Asia (including Russia). Many note that its planned expansion of coal and gas exports are also inconsistent with Paris agreement objectives. This aside, Australia’s per capita emissions are still the highest in the developed world.

Australia’s future prosperity, security and independence require its policymakers to bolster, not erode, its reputation for reliability and fair dealing with friends and rivals alike. Like many countries in Asia, Australia is unusually dependent on strong international institutions to secure the global stability necessary for its national security and prosperity. This was made clear in the security crises of the 20th century and the success of reforms promoting economic opening. But this international order is being seriously threatened by declining US leadership and illiberal tendencies in China.

Australia must increase its efforts to promote international cooperation. This should include proactively encouraging major Asian emitters to improve their Paris commitments, but this cannot be done while maintaining a holdout stance in COP negotiations.

Many argue that policies supporting more rapid decarbonisation would be too economically costly. But the economic and wider costs of not acting are already high and rising. Global business executives recognised this in a recent World Economic Forum survey. Trade and climate policy will become increasingly linked. France has threatened that it will not allow EU trade deals with countries that do not ‘respect’ the Paris agreement, and the European Union’s new Green Deal envisages ‘border adjustments’, or tariffs on carbon intensive imports.

As Ross Garnaut’s new book Superpower argues, the economic gains from a bold Australian decarbonisation strategy could be very large, with substantial benefits for Asia as well. Coupled with a new strategy for compensating domestic communities disadvantaged by rapid decarbonisation, Australia could restore its reputation for positive, innovative policy leadership and secure its regional and global partnerships in the coming decades.

Andrew Walter is Professor of International Relations at the University of Melbourne.