But other views on China’s growth in 2018 are less sanguine. Fixed asset investment was the most important driver of China’s growth for many years and generated almost half of all demand. Investment has recently become less important due to structural adjustments. As pointed out by Martin Wolf many years ago, sustaining aggregate demand as investment weakens will be very challenging for policymakers in Beijing. 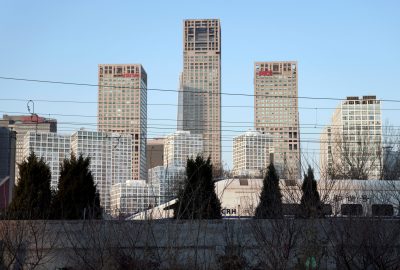 Would increases in other components of demand be able to compensate for decreased investment in 2018? In the first three quarters of 2017, the annualised growth rate of household consumption was 5.9 per cent in real terms (a fall of 0.5 percentage points over the previous year). It is difficult to envisage a sudden surge in household consumption in 2018.

What about net exports? Despite promising global growth prospects, no one knows what the impact will be of US President Trump’s trade protectionism on China’s exports. China will maintain a ‘positive’ fiscal policy, but it will be constrained by local government debt, clampdowns on local government financial vehicles and pressure to introduce tax cuts. The budget deficit is unlikely to surpass 3 per cent.

Can the government reignite investment growth in 2018? China’s fixed asset investment consists of three main categories: manufacturing, infrastructure and real estate. Although manufacturing investment occupies the largest share of total investment at 30 per cent, it has declined since 2012. Unless China achieves some breakthrough in innovation or in institutional reforms, it is unlikely that manufacturing investment will rise significantly. Real estate investment has shown a strong cyclical pattern over the past two decades. After a strong recovery in early 2016, it fell again in 2017. Considering the government’s determination to contain rising house prices, it is unlikely that real estate investment will rebound any time soon.

This does not mean that China’s prospects are altogether dismal. If economic growth falls below the 6.5 per cent target, the government will employ expansionary macroeconomic stabilisation tools — though not without heavy costs for the future.

Some foreign observers insist that the bursting of China’s credit bubble and a resulting Minsky moment are imminent. These concerns ignore the improvement to China’s financial situation since the second half of 2016.

China’s corporate debt-to-GDP ratio is falling. The leverage ratio of China’s non-financial corporations fell by 0.5 percentage point in the third quarter of 2016 and has continued falling since. In the first quarter of 2017, the debt-to-GDP ratio of China’s ‘above scale’ industrial corporations fell by 0.7 percentage points year-on-year.

After the dramatic correction in 2015, China’s equity market is basically stable. The price/earnings ratio and the price/book value ratio fell from 54 to 19 and 8.5 to 2.3 respectively. Further large falls in share prices in China are unlikely.

China’s debt market has calmed. In 2016, there were 19 defaults involving a total of 28 billion RMB (US$4.32 billion). In 2017, there have so far been nine defaults totalling 4.8 billion RMB (US$740 million). Compared with the scale of China’s corporate debt market, these figures are negligible.

Although China’s banks are fraught with many problems, their performance is among the best in the world. Chinese banks’ average return on equity, non-performing loan provision coverage ratio, loan coverage ratio, capital adequacy and non-performing loan ratio are 13.4 per cent, 176.4 per cent, 3.1 per cent, 13.3 per cent and below 2 per cent respectively. Even if the real situation of Chinese banks is much worse than those indicators suggest, it is difficult to believe that China’s banks are heading for financial crisis.

For those who believe that China is facing an imminent Minsky moment, the policy priority should be financial deleveraging even if this slows economic growth. While the surging optimism for China’s growth in 2018 is not warranted, the claim that it faces imminent financial crisis is exaggerated.

China should balance growth and financial risk prevention. A poor growth performance will worsen financial stability and vice versa. In the longer-run, China can benefit from government-promoted innovation as well as recent structural reforms.

Yu Yongding is a Senior Fellow at the Chinese Academy of Social Sciences and former member of the Monetary Policy Committee of the People’s Bank of China.