In November 2016, India made an unexpected economic move and demonetised 86 per cent of the country’s currency in circulation. One year on, any assessment of India’s demonetisation policy is clouded by the similar impacts of subsequent economic reform, namely the introduction of the Goods and Services Tax (GST) in July 2017 and the Real Estate (Regulation and Development) Act (RERA) in March 2016. All three reforms targeted the informal cash and black market economies, while also having spill-overs in the formal economy. 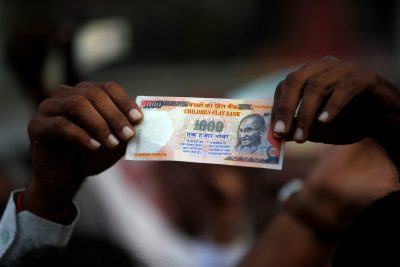 The impacts of the GST and RERA will be persistent and positive in the long term. In contrast, demonetisation was a short-term measure whose own long-term impact should be little. While it made sense as part of a package to reduce informality in the economy, increase the tax base and shift the economy to more transparent digital payment modes, by itself it was not worth the high costs it imposed. Alternative measures could have achieved these objectives.

Furthermore, while its aim of confiscating all black money may have necessitated the degree of secrecy surrounding the demonetisation process, this secrecy also led to the program’s poor implementation and immense inconvenience to the average citizen.

That being said, India’s demonetisation process also led to a number of positive outcomes. Although almost all the money sought was returned to the banking system, so it could not be confiscated, instances of large cash deposits have generated leads on potential tax evaders. The demonetisation moves also sent out a strong signal that tax evasion would be costly.

The first criminal cases based on excess deposits have been initiated against shell companies, which had been set up to avoid taxes. Global data exchange on tax evasion will help with the investigations and clean up.

According to monthly data from the Reserve Bank of India on the electronic payment system, after demonetisation was introduced the volume increased from 671.5 in November 2016 to 975.5 million in December 2016. While it did decrease after the December 2016 peak, it still remained high at 883.4 in August 2017. So demonetisation has provided a permanent fillip to the digital economy.

Demonetisation, followed by RERA, made the use of cash difficult in the real estate sector, which was once a haven for black money. Some of the cash that used to be invested in real estate has now been switched to mutual funds. Household acquisition of shares and debentures rose from 413 billion rupees (US$6.16 billion) in 2015–16 to 1825 billion rupees (US$28.5 billion) in 2016–17. These savings can now be better intermediated by firms and the government. The switch from unproductive cash investments to earning assets may also reduce wasteful consumption by the poor.

India’s sharp rise in currency over 2014–16, regarded as an attempt to escape a rise in service taxes, may have triggered the government’s decision to demonetise. The currency deposit ratio fell from 16.9 to 8 in December 2017 and then stabilised at 13.5, suggesting a permanent reduction in cash use although the ratio is still higher than in most other economies. The shift away from cash increases transparency, since non-cash transactions generate data trails.

There was also a temporary reduction in high-powered money and a rise in bank deposits. If more savings stay in banks, then the money multiplier — broad money compared to cash — should rise over time. This peaked at 8.7 as currency was withdrawn, and stabilised at 6.4 by June 2017, both of which are higher than the figure of 5.5 before demonetisation.

Since the informal sector is heavily cash dependent, it bore the brunt of cash withdrawal. One survey-based estimate is that 2 million jobs were lost between January and August 2017. But the labour participation rate suggests it was only a temporary loss. It fell from 48 per cent in January 2016 to below 45 per cent in November 2016, to 43 per cent in July 2017, before finally recovering. The drying up of informal work may have discouraged job search activity during these low points. The badly hit construction and real estate sectors had also bottomed out by mid-2017.

The imposition of GST in the same time period also hurt the informal sector. The costs imposed on the working-class Indian is one reason for severe liberal criticism of demonetisation. But whether these costs of forced formalisation are larger than the benefits can only become clear in the long term.

Reforms always hurt some groups — that is why they are hard to implement. But using new technologies for better data collection will allow banks to assess risks and lend to small firms with reduced lags, alleviating some of the hardship associated with reform. Global trends are also against tax evasion. That the majority of Indians have expressed support for the policy demonstrates their willingness to bear the costs to increase the tax base and reduce corruption. The country seems ready for a major switch in social norms.

Ashima Goyal is Professor of Economics at the Indira Gandhi Institute of Development Research (IGIDR), Mumbai.

A longer version of this article originally appeared here at Hindu Business Line.