During his state visit to China in October 2016, Philippine President Rodrigo Duterte declared his ‘separation of foreign policy from the United States’ and his intention ‘to follow the ideological path’ of China and Russia — the first of many provocative statements against the Philippines’ traditional allies. The economic managers of the Philippine government sought to assure the international community that, despite the President’s rhetoric, it is still ‘business as usual’. 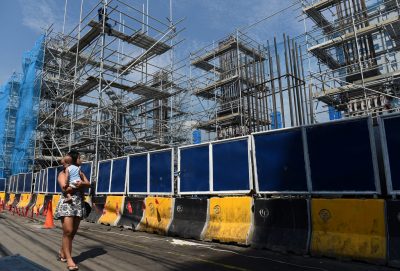 China’s share of Philippine exports declined from 12.2 per cent in 2016 to 10.4 per cent in 2018 as a result of the diversification of export partners. China remained the third top export destination of the Philippines. Under Duterte’s term, the bilateral trade deficit with China increased — comprising 19.6 per cent of Philippine imports as of 2018. Trade in services remained upbeat for the same period. Driven by the strong Business Process Outsourcing Sector, the Philippines boasted a 20 per cent growth in services trade from 2017 to 2018.

But the United States remains one of the top 10 FDI sources. Investments coming from China remained small at US$4.6 million, compared with the investments from Southeast Asia, Japan, the European Union and the United States for the period cited. Russia has been a peripheral trade and investment partner despite Duterte’s statements of strengthening ties with the country.

The foreign policy pivot did not affect official development assistance (ODA). Japan remains the Philippines’ top source of ODA, providing the Philippines a total of US$5.98 billion in loans and grants as of September 2018. The other top five ODA sources were: the World Bank with US$3.13 billion, the Asian Development Bank with US$2.24 billion, the United States with US$806 billion and South Korea with US$659 billion. The European Union offered US$167 million in grants. China delivered US$124 million in loans and grants.

Negotiations for the Philippines–EU Free Trade Agreement were revived, showing a willingness to strengthen ties with the European Union. The Duterte administration continues the previous Aquino administration’s strategy to build a more competitive manufacturing sector. It was implemented in partnership with the United States, the European Union and Japan and is projected to be completed in 2025. The manufacturing sector has grown an average of 7.6 per cent from 2010–2017.

Duterte has admitted that he is not well versed in economic issues and that he would leave economic matters to the experts. Technocrats continued programs from the previous administration and pushed unaddressed reforms that have been difficult to implement in the past. They have gained a more influential role as was evident in the ratification of the rice trade liberalisation law (Republic Act 11203) in March 2019. The law converted the quantitative restrictions on rice imports into tariffs and limited the regulatory power of the National Food Authority to import and distribute food, aiming to address the chronic seasonal rice shortages of the country.

Deregulation faced strong opposition from the agriculture sector. Duterte disregarded the plea of the farmers’ groups, NGOs and food security advocates. They fear that cheap imports will threaten the livelihood of local small-scale rice farmers. Small traders may be weighed down by a few large rice traders who can form rice cartels to arbitrarily control the supply and prices of rice.

Duterte defied governance norms when he appointed Budget Secretary Benjamin Diokno as Governor of the Bangko Sentral ng Pilipinas on 4 March 2019. This position is traditionally selected from senior career central bankers to preserve its political independence. Diokno is a seasoned technocrat with a long record of public service. But his close ties to Duterte and his dovish reputation on fiscal deficit was seen by some analysts as a risk to macroeconomic stability.

Under Diokno’s watch as budget secretary, the fiscal deficit increased in nominal terms 1 percentage point from 2017 to 2018. The economy remained stable because it was growing at more than 6 per cent. As long as the GDP growth rate stays at 6–7 per cent, the economy will remain stable even with a projected fiscal deficit of 3.2 per cent of the GDP in 2019.

One of Diokno’s first initiatives was to cut interest rates. This was to stimulate the economy due to external risks, including the US–China trade war and economic growth deceleration to 5.6 per cent in the first quarter of 2019. Under a less popular administration, this would have been more difficult to implement given its impact on accelerating inflation.

Despite Duterte’s unpredictable leadership, the economy has remained stable enjoying one of the fastest GDP growth rates in Asia. Duterte inherited a strong economy and cash-rich government from the previous administration. This provided his government with plenty of opportunities to carry out his agenda while expanding reforms initiated by his predecessors. The sophisticated technocracy and economic institutions work as anchors of economic resilience and play important roles in cushioning the negative impact of Duterte’s crass leadership.

Jenny D. Balboa is a Lecturer at the Tokyo University of Foreign Studies (TUFS).

Shinji Takenaka is a Senior Economist at the Japan Center for Economic Research (JCER), Tokyo.