The ASEAN–Australia special summit on 17–18 March 2018 concluded with the issuing of the grandly titled ‘Sydney Declaration’. The joint statement nods to many of the issues raised at the summit including security, trade, investment, rights and people-to-people links. Yet there was something anticlimactic both about the document and the summit as a whole. There was no big breakthrough, sense of achievement or decisive initiative. The event was deeply ASEAN in that it put a high value on symbolism and process but a lesser premium on functional breakthroughs. 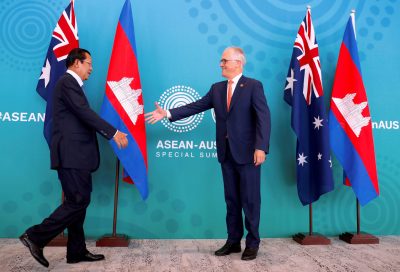 When the Australian government secured an ASEAN agreement to host a special summit in 2016, few — beyond those unhealthily interested in Asian regionalism — appeared to notice. Prime Minister Malcolm Turnbull had only been in office for two months, but he seemed to have an instinctive feel for the particularities of ASEAN diplomacy and secured what insiders regarded as a diplomatic coup.

While hosting a summit seemed a good idea, its larger purpose was less obvious. After all, Australia was ASEAN’s first dialogue partner. It already had a free trade agreement with ASEAN and in 2014 formally upgraded its relationship to ‘strategic partnership’ status. What more could the summit achieve?

The answer was three-fold. First, the summit intended to jumpstart the Australia–ASEAN economic relationship. Australia’s economic ties to Southeast Asia belie the dynamism of the region’s growth and burgeoning middle class. Outbound Australian investment is astonishingly low. The government is keen to promote trade and investment both for the economic benefits but also as ballast in stabilising political and strategic links.

Second, the government wants to give Southeast Asia a more central role in Australian foreign policy. In recent years, Australia’s foreign policy has heavily slanted towards bilateral ties with Asia’s major powers. With the exception of Indonesia, the focal points have been in Northeast and South Asia. The summit was seen as an important means to rebalance Australia’s regional policy.

Third, Australia sees ASEAN as a potential buttress of the prevailing regional order which is being unsettled by the United States’ declining influence and China’s rising power. Ensuring the status quo remains in place will require some adjustments to its structural support mechanisms. Rightly or wrongly, Canberra believes ASEAN can help with this task. The summit was a vital first step signalling greater Australian engagement with ASEAN and grappling more directly with questions of regional order.

These are all long-term goals that no one summit can achieve. There was even a slight feeling of anomie at the summit itself. The need for enduring ASEAN–Australia engagement is part of the reason that debate about Australia’s potential membership to ASEAN gained such currency. In the lead up to the summit, think tanks and pundits all produced various ASEAN-related pieces in which the issue of whether or not Australia should join once again reappeared.

Surprisingly, Indonesian President Joko Widodo endorsed the idea of Australian membership when asked by Australian media. Yet few could explain why Australia should join beyond that membership would send further signals about the country’s commitment to ASEAN.

There are obvious cultural issues relating to Australia’s membership. Australia would have to somehow show that it had finally left its European colonial history behind, but many in Australia would disapprove of this on a symbolic level. The benefits that would accrue to Australia by joining were also hard to discern. The costs of membership were not convincingly rebutted. Australia is nowhere near as economically tied to Southeast Asia as it is bound to Northeast Asia. Nor would its foreign and defence policy sit comfortably with ASEAN norms and principles.

Another problem with the discussion about ASEAN membership related to much of the debate about the summit more broadly: the conflation of ASEAN with Southeast Asia. This is an easy mistake to make as the grouping has been remarkably successful at forging a sense of Southeast Asian geopolitical space. But the reality remains that it is an organisation of states that is thinly institutionalised. Its main contribution relates to important but ultimately protean issues of trust and consensus among Southeast Asian elites.

The states of Southeast Asia remain hugely important. It was telling that in the lead up to and even during the summit itself, the bilateral meetings and statements seemed to matter at least as much as the multilateral gathering itself. If Australia wants to make Southeast Asia the ‘strategic fulcrum’ of its Indo-Pacific strategy, it needs to look well beyond ASEAN as an institution.

Australia was right to host the ASEAN–Australia summit. But for the government to achieve its ambitions, it needs to ensure that the attention and focus Southeast Asia received over the summit (and in the months leading up to it) is sustained over the coming years. This will be extremely difficult given the demands on Australia’s limited diplomatic resources and the short attention span of politicians, especially as Asia’s increasingly contested geopolitics intrude ever more on ASEAN and its dialogue partners.

Nick Bisley is Head of Humanities and Social Sciences and Professor of International Relations at La Trobe University.