On 19 June 2017,  the United Nations Office on Drugs and Crime (UNODC) organised a General Assembly debate to warn that crime groups are globalising and are now primary threats to security and development. The debate also featured a special briefing on Southeast Asia, a region that is particularly vulnerable to the reach and influence of organised crime.

Southeast Asian countries have enjoyed an impressive increase in GDP in recent years. This progress has been in large part due to regional agreements that promote freer movement of people, goods and capital, leading to an increase in trade and overall economic growth. But transnational organised crime groups have also capitalised on these regional integration processes to expand their operations to traffic and smuggle drugs, people, weapons, timber, wildlife and counterfeit goods across borders. The conservative annual estimated value of this regional illicit market is a staggering US$100 billion dollars. 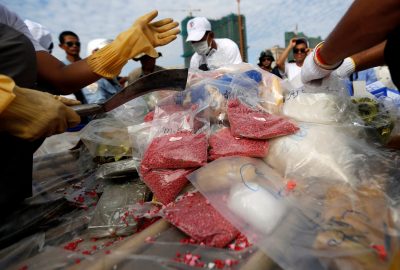 These illegal activities are often opportunistic, with criminal groups taking advantage of gaps in national legal systems as well as inadequate capacities of, and coordination between, law enforcement agencies. For example, traffickers exploit inconsistencies in border management between two sides of a border, but they also identify where deficits in legal systems and regional cooperation prevent an effective response to transnational crime.

The regional illicit drug market is estimated to be worth over US$30 billion per year. UNODC research shows that Southeast Asia hosts the world’s largest methamphetamine market, as well as the second largest opium and heroin market. While the business models of the two drugs are quite different, production of both generally takes place where state institutions are weak and chances of interception are low. The drugs are then trafficked to meet demand in large population areas.

Opium cultivation and heroin production are geographically confined to lawless areas in the ‘Golden Triangle’ of northern Myanmar and parts of Laos. But the production and trafficking of methamphetamine has proliferated throughout Southeast Asia at an alarming speed.

Transnational organised crime groups have grown the business by exploiting weaknesses in state capacities to regulate precursor chemicals, as well as gaps in law enforcement and regional cooperation. Illustrating the speed of the methamphetamine threat, within the last few years 6 of the 10 ASEAN countries reported production of the drug at an ‘industrial scale’, and 9 of 10 reported rising seizures and use. With organised crime groups in China also producing and trafficking significant quantities of methamphetamine into and through the region, Southeast Asia is now the world’s largest methamphetamine market.

But drug production and trafficking are not the only transnational organised crimes that challenge the region.

Throughout Southeast Asia, migration is an answer to unemployment, low wages and a lack of economic opportunities. UNODC lists Thailand as the most frequent destination of regional migrants. But their economic and legal predicament often leaves them at the mercy of criminal networks. This has led to a disturbing increase of smuggled and trafficked migrants, with possibly the most extreme and visible case being the Bay of Bengal crisis of 2015.

Other forms of transnational organised crime also challenge Southeast Asia, but summarising the differences and nuances of each is not the point. The fact is that these groups have been able to evolve and expand their business as regional integration and connectivity has deepened. And it is increasingly obvious that the activities of transnational organised crime in Southeast Asia threaten the development and stability of the region.

As Princess Bajrakitiyabha Mahidol of Thailand noted in her speech at the General Assembly on 19 June, tackling transnational organised crime in Southeast Asia will require leadership. There needs to be a focus on strengthening the rule of law and establishing and strengthening effective cooperation mechanisms throughout the region.

Having managed UNODC operations in Southeast Asia in recent years I endorse this assessment and urge the region to take action to prevent further deterioration. I am convinced that with an increased and dedicated focus by leaders, governments and ASEAN, coupled with consistent encouragement and support from the United Nations and other international partners, we can turn the tide against transnational organised crime in Southeast Asia.

Jeremy Douglas serves as the Regional Representative for UNODC in Southeast Asia and the Pacific and delivered the briefing on Transnational Organised Crime in Southeast Asia at the General Assembly High Level Debate on 19 June 2017. He can be followed on twitter @jdouglasSEA.