The immense demand for amphetamine-type stimulants (or ATS, such as crystal methamphetamine and ecstasy), opiates and new psychoactive substances among the increasingly wealthy urban residents of East Asia — and beyond — has revitalised organised crime in the region. In turn, Asian crime entrepreneurs engage in an industrial global business exporting precursor chemicals and importing opiates from the golden triangle or Afghanistan and cocaine via Africa from South America, often for re-export to the US and valuable markets in Europe, and Australia. 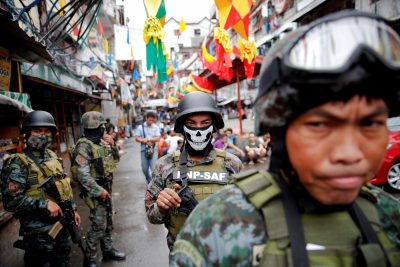 Australian police working with Chinese authorities in Sydney seized 720 litres of liquid methamphetamine in February 2016. It was the largest bust on record, with a ‘street’ value of A$900 million (US$673.97 million). The methamphetamine was originally shipped from southern China concealed in thousands of gel pads inserted into push-up bras and art supplies.

Responding to these challenges are a handful of capable law enforcement agencies; a patchwork of cross-border mutual legal assistance agreements; and a fledgeling, fragile regional security response from ASEAN, APEC and other multilateral fora.

The United Nations Office of Drugs and Crime (UNODC) estimated that crime groups earned about US$90–100 billion per annum from illicit sources. Narcotic production and trafficking in precursors top the list, along with all kinds of fake products, illegal wildlife and timber trading.

Cross-border movement of illicit products into and out of Southeast Asia, often via India and China, has intensified in recent years. This is in part due to free-trade agreements between ASEAN and these countries, as well as the massive upgrade of the region’s infrastructure and connectivity now underway.

Yet a recent UNODC assessment noted that, despite the existence of ‘thriving networks of cross-border criminals’, a ‘fully operational framework on tackling cross-border crime does not exist’.

Although common in the 20th century, fatal acts of violence are increasingly rare in Hong Kong, Macau, Taiwan, Japan and many parts of the Chinese mainland. Yet strategic violence still plays a crucial role in enforcing contracts in illicit markets and establishing distribution markets. Triads have merged with or rent local protection services in China and Southeast Asia. These looser macro-criminal networks are often referred to as ‘red-black’ in Chinese, a euphemism for collaboration between the criminal world and corrupt elements of the state. This occurs especially frequently at the county level in China or at the sub-state level in the Golden Triangle, as the tri-state confluence of Myanmar, Laos and China is known.

The Triangle is now also known for the mass production of ATS, built on the older tradition of opium production and heroin refinement. The area’s drug production genealogy goes back to the displaced Shanghai ‘Green Gang’ chemists of the 1950s and its militarisation by detached nationalist warlord armies, the consequences of wars in Indochina and ethnic conflict within the Burmese state.

Ecstacy, ice pills and heroin are transported from production areas in northeast Myanmar in modest quantities of a kilogram or less — under the prevailing legal threshold for trafficking — to markets in Bangkok. Larger amounts may be diverted via Cambodia for transhipment to highly profitable overseas markets like Australia.

Central to the suppression of organised criminal activity will be the action of the ASEAN+3 group. Chinese-led restrictions on the export of precursor chemicals, effective from late 2015, should be significant if followed by India and ASEAN.

Worthy but nonsensical aspirations and plans for a ‘drug-free’ region by 2015, set out at the 2010 ASEAN Ministerial Meeting on Transnational Crime, signal relatively weak integration with regard to non-traditional security problems. Alternative policies that seek to regulate recreational drugs and the pursuit of harm-reduction strategies would help to undercut the profits of criminal groups, but at the same time greater recognition is needed of the contribution of consumer choice on the demand side. Policies that reorient consumer choices to undercut the goods and services organised crime provides are also needed.

Since Duterte took over as president in July, 2086 drug crime suspects had been killed during police operations while ‘vigilantes’ had killed 3841 as of 12 December. It is unlikely that Australian law-enforcement agencies will be keen to involve themselves in a bloody campaign that may encourage summary executions and undermine the rule of law.

Continued support for the independent assessment of emerging threats in both the traditional and non-traditional security spheres remains crucial to developing capabilities and to any hope of reducing the impact of transnational crime activities on Australia. Countries like Australia must keep in mind that the action is not just ‘over there’. It depends on reducing the demand for illicit products and the predatory actions of criminal entrepreneurs, at home and abroad.

An extended version of this article appeared in the most recent edition of the East Asia Forum Quarterly, ‘Managing China’.