China has the highest afforestation rate in the world, resulting in a 9 per cent increase in forest cover over the past 30 years. This is not for reasons of altruism. Since 2000, China has emerged as the main processing hub for the world’s forest sector. Yet historical forest loss has made China one of the most forest-deficient countries in the world, with a national forest cover of 22 per cent, compared with the global average of 31 per cent. 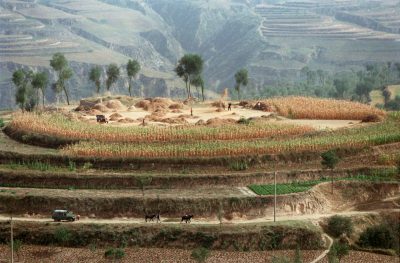 Most recently, the 13th Five Year Plan put forward in 2016 included measures to enhance and complete a series of national geographic databases for natural resources, including one for forests. It is too early to speculate on the outcomes of new legislation and how the international carbon reduction pledges will affect national policies, both of which have significant implications for forest reserves. But lessons have been learnt from existing land degradation across China.

In one particularly highly publicised case, soil erosion in the Loess Plateau contributed to massive sandstorms that periodically choked Beijing during the 1980s and 1990s, including the infamous ‘Black Wind’ of 1993.

The Loess Plateau in north-central China is a large, hilly, semi-arid region roughly the size of Afghanistan. Thousands of years of farming, which intensified during the Cultural Revolution, left the former grasslands degraded and eroded. Food production was down, waterways filled with silt and air in faraway cities suffered from sandstorms born on the Loess Plateau. The fact that the local population had reached some 50 million people made the problems worse. Something had to be done.

In 1994 a US$500 million restoration effort began. Two Loess Plateau watershed rehabilitation projects were implemented in 48 counties across Shanxi, Shaanxi and Gansu provinces and the autonomous region of Inner Mongolia.

The impacts of the restoration efforts of the Loess Plateau and other similar projects were analysed in search of common features of restoration success and failure. Three common themes for successful restoration were identified.

First, a clear motivation existed. Decision-makers, landowners and/or citizens were inspired or motivated to restore forests and trees in landscapes.

Finally, adequate capacity and resources existed and were mobilised to implement forest landscape restoration on a sustained basis on the ground.

The positive impacts of the Loess Plateau restoration project have received considerable attention. Policy change and enforcement were essential to this success, especially in stopping grazing and controlling changes in land use.

According to the World Bank, in some places in the Loess Plateau, local farmers saw their incomes double, erosion was reduced by 100 million tonnes of sediment annually, there was a reduction in flood risk and grain production dramatically increased. But these results also brought costs.

The speed of China’s effort was possible only by using single species or minimally diverse plantings and local communities were often unable to enjoy the benefits of restored forests. While in some areas restoration has protected land from desertification and brought better rural livelihoods, in others, trees have grown slowly and some are already dying. Chinese experts readily admit trees were sometimes planted in arid regions better suited to grass. This has led to a growing desire to ‘green China naturally’.

Besides donor funding, the private sector has an important stake in restoration. Popularising the danger to the food industry (of toxins, additives and bioaccumulation), coupled with the environmental needs for restoration, can be leveraged to motivate industry to engage in restoration efforts.

It is easy to blame restoration mistakes on poor science, but that underplays the importance of culture. The open, semi-arid landscape of the Loess Plateau is home to the Hui ethnic people and is peppered with mosques. This landscape is very different from the cultural ideal of the Han ethnic people who make up 92 per cent of China’s population and dominate its political and cultural life.

China has worked hard to create a sense of national unity. Yet nature will not be bound by our sense of order. It is important to consider what land managers could learn from the Hui people’s historical relationship with their landscape. Local knowledge and the best available science should be utilised to restore and protect landscapes for generations to come.

Kathleen Buckingham is a Research Associate at the World Resources Institute.

This article is a digest of the authors’ chapter from the publication for the latest China Update, which was held at the ANU on Friday 22 July. A free e-book is available here.