During the era of Communist rule in the former Soviet Union, Mongolia was integrated into a Soviet collective security system. Since the breakup of that system in the early 1990s, land-locked Mongolia has sought a way to get along with both of its large and powerful neighbours, China and Russia, and to ensure its own security through defence and diplomacy. Mongolia’s post-Cold War efforts to develop an independent security policy offer insight into the delicate strategic balancing that its geographic location ‘between the hammer and the anvil’ demands. 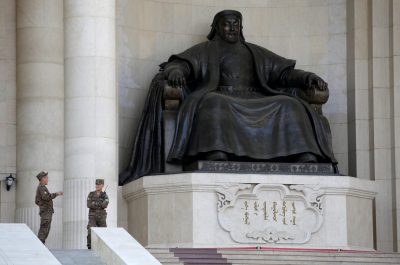 As the Sino–Soviet rift of the early 1960s developed, Mongolia shed its balanced relations with its immediate neighbours and drew closer to Russia. From the 1960s to the 1990s, Soviet forces in Mongolia provided it with military assistance as part of a strong Soviet defence presence in Northeast Asia.

The disintegration of the Soviet Union left Mongolia scrambling to create a new security framework for itself. Since there was no longer a collective security system in place, it became vital for Mongolia to create an independent security policy that gives priority to its national interests: ensuring its independence and territorial integrity, achieving economic security and development, and protecting the civil liberties of its people.

To this end, Mongolia’s contemporary national security strategy has three major policy goals. The first relates to enhancing its relationships with its immediate neighbours (China and Russia) and its ‘third neighbours’ — the non-contiguous countries relevant to Mongolia’s national security interests like the United States. The second involves justifying the Mongolian military’s leading role in homeland security, in the support of civil defence operations and in peace support operations outside of Mongolian territory. The third involves establishing a future defence policy for the country and for the Mongolian Armed Forces (MAF).

With a population of 3.1 million and a GDP of US$11.2 billion in 2016, Mongolia’s national defence needs push against the constraints that flow from its limited human and material resources. Defence budget constraints force the MAF to rely on limited technological and military reforms. Because Mongolia is not able to protect its entire territory with its military force, the Mongolian government officially adopts a defensive position and prepares the MAF for localised combat action.

With its current capacity, the MAF could develop and strengthen its military-to-military cooperation with entities that support Mongolia’s security interests (like the United Nations, the United States, Germany, Japan and South Korea) by increasing its participation in overseas peace support operations. This would not only bolster Mongolia’s influence in the international arena but also serve to enhance Mongolia’s own defence capability.

As a small military power, Mongolia must also rely on diplomacy to ensure its security. This means developing friendly relations with its neighbours and building ties with key members of the international community.

It is in Mongolia’s interest to work towards strengthening a common security policy in Northeast Asia and beyond. The rapid economic development of its regional neighbours means that Mongolia needs to keep its independent defence force up to date and to hone the MAF’s skills by participating in overseas operations. Defence diplomacy and cooperation is vital to provide security for Mongolia’s people and to promote regional and global stability.

Mongolia is more secure from conventional military threats and border tensions today than it has been since the beginning of the 19th century. The contemporary security threats that Mongolia faces are more diverse and dynamic than those of its past. These new threats — such as terrorism, the proliferation of nuclear, biological and chemical weapons, natural disasters, epidemics and environmental degradation — put added pressure on Mongolia’s still-developing democracy.

The changing nature of Mongolia’s security situation has important implications for its defence outlook and the future direction of its defence policy. Mongolia is taking active measures to develop a modern military force that is capable of performing a variety of tasks from disaster relief to overseas peace support operations. The MAF must be versatile, adaptable and ready to spring quickly into action.

International engagement is not new for Mongolia — especially in military training and arms procurement. But the current and future focus of its engagement needs to be on promoting peace in the region and beyond through global humanitarian operations. Far from just being between the hammer and the anvil, Mongolia has proven itself to be a contributor to global peace and stability and should continue on that path.

Colonel Amarbayasgalan Shambaljamts is a Mongolian Armed Forces officer with 25 years of service. He is also a graduate from the US Army War College.

The views expressed in this article are those of the author alone and do not necessarily reflect those of the Mongolian Armed Forces or the US Army War College.

A version of this article originally appeared here on War Room.