North Korea’s nuclear weapons program remains one of the key challenges to regional security in Asia. Dealing with this predicament has been the major foreign policy focus of South Korean President Moon Jae-in’s administration since its inauguration in 2017. Initially he conducted crisis diplomacy aimed at de-escalating the surging tensions between US President Donald Trump and North Korean leader Kim Jong-un. This was a natural response to the rhetorical threats exchanged between the pair that ostensibly brought the Korean Peninsula to the brink of war. 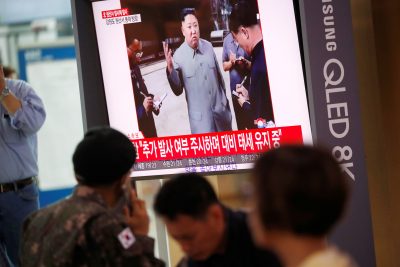 The crisis seemingly subsided with the advent of a season of diplomatic summitry between Kim and regional leaders. While this did not bring about significant progress on denuclearisation, Moon continues to engage bilaterally with the Kim regime and encourages the Trump administration to persist in the same vein.

Surprisingly, Seoul has not sought out cooperative partners in its diplomatic dealings with Pyongyang through coalition-building or multilateral diplomacy. As Jeffrey Robertson argues, such an approach would be consistent with South Korea’s middle-power status and identity. It would also presumably be a more effective strategy given the complexities of denuclearisation. Kim’s nuclear program has so far been impervious to sanctions and various forms of diplomatic pressure, exploiting the fractious nature of the regional political landscape amid the Sino-US rivalry.

A number of considerations have informed his preference for bilateral top-down diplomacy. First, the Moon government’s plan to resolve security tensions with Pyongyang is premised on establishing a peace regime on the Korean Peninsula and was conceived in an inter-Korean framework. This approach is based on an assessment that North Korea’s nuclear program does not constitute a discrete threat but rather a side-effect of long-standing systemic structures of hostility on the Peninsula.

At the root of such structures is the 1953 Korean Armistice Agreement that has framed bilateral interactions for decades and has served as a symbol of the unfinished Cold War on the Peninsula. Moon’s approach emphasises the need to formally end the Korean War through the conclusion of a peace treaty for confidence-building that will induce North Korea to take steps towards reversing its nuclear program. This policy essentially characterises security on the Peninsula as a precondition to denuclearisation.

A second objective of Moon’s engagement strategy is to deepen bilateral economic ties with Pyongyang. It is assumed that market interests will mitigate against hostile intentions in the north, and also improve the security environment on the Peninsula and its surrounds. This approach recasts North Korea from an adversary to a potential market, based on the logic that increasing economic interdependence between the two Koreas will disincentivise the Kim regime from further developing its nuclear arsenal.

South Korea’s approach to the North Korea foreign policy challenge does not readily lend itself to middle-power diplomacy. In the Six-Party Talks process, it became clear that there was great variance in the ordering of priorities among the member states. Based on this experience, Seoul has little confidence in the possibility of building a coalition that prioritises the establishment of a peace regime on the Peninsula, and one that would regard this as a precondition to denuclearisation.

Many governments and would-be coalition partners in the region do indeed regard North Korea’s nuclear weapons program as a discrete threat. There is also a salient belief in the region that signing a peace agreement and strengthening economic ties with North Korea would constitute unwarranted concessions. It is unsurprising that Seoul has opted for a bilateral top-down approach in preference to middle-power diplomacy.

By establishing a new incentive structure that economically rewards North Korea for rolling back its belligerence, Moon is attempting to establish a new logic for inter-Korean relations. In his strategic thinking, rapprochement between the two sides will provide a solid foundation for the security of the Peninsula, and this will have ripple effects for regional security.

Moon also continues to view the role of the United States as central to resolving the North Korean security dilemma. Although Moon is yet to convince Washington that a peace regime on the Peninsula is a necessary precondition for denuclearisation, Trump has been relatively obliging of Moon’s calls for sustained engagement with Kim.

As progress with North Korea appears to be lagging — and even backtracking — on many fronts, the Moon government may need to consider the possibility of there being a missing factor in the North Korean security equation: Japan. As long as Pyongyang remains in an antagonistic relationship with Tokyo, it is difficult to envision the Kim regime laying down its defences. Since the structures of hostility that Moon wishes to dismantle extend beyond the Peninsula to North Korea’s surrounding environment, it would be worthwhile for Moon to incorporate Tokyo into his coalition of engagement.

The Moon administration’s reluctance to build coalitions with neighbouring states, like Japan, is partly premised on a belief that such states have contributed to, benefitted from and even exploited the divided state of the Peninsula. But it is becoming increasingly apparent that security assurances from Seoul and Washington alone will be insufficient to elicit change in the Kim regime’s behaviour. The task of facilitating a rapprochement between Pyongyang and Tokyo and incorporating Tokyo into a coalition of engagement would undoubtedly be fraught with challenges. But if Moon could manage such a feat with Trump, anything is possible.

Lauren Richardson is Director of Studies and Lecturer at the Asia Pacific College of Diplomacy, Australian National University.

A longer version of this article appears in the most recent edition of East Asia Forum Quarterly, ‘Middle Power Game’, Vol. 12 No. 1.