The meeting jumpstarted the whirlwind of North Korea’s summit diplomacy and prompted a new wave of hope that diplomacy could be effective after years of confrontation and tensions. 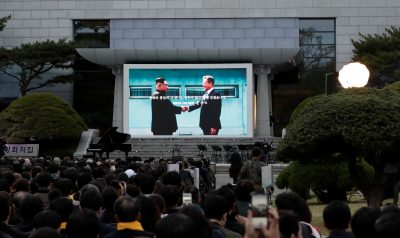 But the anniversary was marked with mixed messages and dissonant attitudes — it was celebrated by the South Koreans alone. North Korea remained unresponsive to the South’s invitation to the anniversary ceremony, and North Korea’s Committee for the Peaceful Reunification of the Country openly demanded that the South explore ‘more active measures’ to improve inter-Korean ties. The inter-Korean rapprochement efforts borne out of Panmunjom are stranded by the stalemate on the nuclear track.

The US–North Korea relationship is no better. Most informed observers were not optimistic about a definitive resolution to the long-standing North Korean nuclear problem, but what happened in Hanoi still shocked many.

Still, the current stalemate should not be taken as a restless waiting game or a prelude to dejected failure. The situation is frustrating and nerve-wracking to some, but the good news is that neither side is willing to close the window of talks and jump off the lurching — but still running — train of diplomacy.

The recess from active negotiation is an opportunity to regroup — to review strategies, reshuffle the key players as necessary, reconsider the objectives and renew momentum. It is time to plan for the next phase of negotiation. Two things should be kept in mind: diplomatic achievements to date should not be discounted, and the dangers and consequences of diplomatic failure with North Korea should not be downplayed.

There have been promising steps taken over the last year and a half of engagement with North Korea. Kim Jong-un and the North Korean leadership were drawn out of reclusion. Kim held 12 summit meetings in a period of 13 months — only slightly fewer than those his father Kim Jong-il, the previous leader of North Korea, held during his entire 18-year-tenure.

Kim Jong-un’s participation in multiple individual meetings with world leaders makes it much more difficult for him to turn back and return to his past pattern of seclusion. He now knows how it feels to be in the world’s spotlight and to be treated as a leader of a normal state.

Through the process of summit diplomacy — a brand-new experience for the North Korean leadership and ruling family — they learned first-hand how diplomacy works uncloistered from their hermit kingdom. They may be convinced of the value of such normalcy. The process of diplomacy is a learning experience for North Korea, but it is also a rare opportunity for the rest of the world to learn about North Korea.

There are a number of shortfalls in the current North Korea diplomacy that require better strategic planning for future negotiations. Although the merits of a top-down diplomacy should not be discounted, its limits can also impede the actual progress of negotiation. Summit meetings decided on and driven by the top leaders without sufficient preparatory work are bound to fail, as seen in Hanoi. This is especially true when there are so many technical and clarification issues — such as the definition of key terms like denuclearisation — that need to be worked out in advance.

Nonetheless, the power of personal chemistry cannot be overestimated as summits are more than the value of appearances in pictures and the exchange of flattering words at social dinners.

Outsider must also remember that while North Korea is an authoritarian state, the country still seems to operate on its long-established system. As such, Kim’s de facto (institutional) power in North Korea may not be as great as his de jure power. This limits what he himself can decide and do on behalf of the North Korean leadership.

Despite its pitfalls, the Hanoi experience was valuable in that it gave the two leaders ‘a better understanding of each other [and] the positions that the two sides had’, to borrow US Secretary of State Mike Pompeo’s words. But avoiding another Hanoi is imperative — at that point, diplomacy may no longer be a fixture of the debate. Talking is better than not talking, and it is advantageous to keep North Korea on board. But subsequent meetings should achieve more than symbolic gains and should lock in gains made at previous meetings.

Nuclear negotiations with North Korea will perhaps resume in the coming months. Both sides have come too far to let the past year of conciliatory efforts go to waste, and neither side is ruling out the possibility of a third summit. As North Korea is taking advantage of this indefinite recess to reshuffle its negotiating team, broaden its diplomatic outreach to China and Russia, and re-evaluate its strategy, the rest of the stakeholders should take note and do the same.