At the end of 2017, the Korean Peninsula appeared to be on the brink of a major confrontation — possibly even nuclear war — between the United States and North Korea. 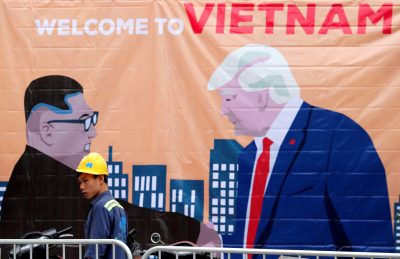 The war of words escalated for months, with US President Donald Trump threatening to rain ‘fire and fury’ on North Korea if Pyongyang continued to endanger the United States with long-range missiles. North Korea responded with threats to attack the US territory of Guam. In November 2017, North Korea tested an intercontinental ballistic missile that Pyongyang claimed could strike any part of the United States with a nuclear warhead. Washington weighed a military response.

But at the beginning of 2018 Kim Jong-un proposed sending a North Korean delegation to the Winter Olympics in South Korea. Just five weeks later North Korean officials and US Vice President Mike Pence were sitting a few metres apart at the opening ceremony.

In April 2018, Kim and South Korean President Moon Jae-in met on the border at Panmunjom and two more summits followed later that year. More remarkably, Kim and Trump held the first-ever meeting between the leaders of North Korea and the United States at Singapore in June. They are meeting again in Hanoi this week, and Kim and Moon plan to hold a fourth summit later this year.

While inter-Korean relations are progressing rapidly along several dimensions, US–North Korea meetings involve more symbolism than substance. Even so, the symbolism itself is remarkable and unprecedented. Inter-Korean cooperation and US–North Korea engagement are developing a momentum that will be difficult to reverse.

Before 2018, leaders of the two Koreas had met only twice, in 2000 and 2007. Kim and Moon have met three times in less than five months. More importantly perhaps, Seoul and Pyongyang are taking several significant confidence-building measures. These include removing landmines and guard posts on the border, ceasing propaganda broadcasts, resuming ship-to-ship communication in the West Sea and restoring the bilateral military hotline.

The two Koreas also agreed to resume reunions of separated families, establish an inter-Korean liaison office in Kaesong in the North, propose jointly hosting a future Olympic Games, and cooperate on a wide range of economic and cultural ventures.

Despite the ambitious goals, inter-Korean cooperation remains limited by the imposition of international sanctions on the North. Technology transfer, large-scale investment and foreign aid are all but impossible under the current sanctions regime. At least since announcing a ‘new strategic line’ in April 2018, Kim is making it clear that he wants to shift his country’s priorities from nuclear deterrence to economic reform and growth. But unless there is a serious movement toward denuclearisation and a breakthrough in relations with the United States, North Korea’s economy will remain isolated and its growth limited.

Meanwhile, South Koreans’ enthusiasm for President Moon’s policy toward the North is waning, along with the President’s popularity in general. Much of Moon’s loss of popularity may be due to his economic policies and general dissatisfaction with unemployment and income inequality in South Korea. But the failure of North–South dialogue so far to produce concrete results — such as a peace agreement to end the Korean War or normalisation of US–North Korea relations — means high expectations have been disappointed.

North Korea has refrained from testing nuclear weapons or ballistic missiles since 2017, in keeping with the spirit of the Singapore summit. In an evident attempt to prod the United States into reciprocal action, Kim Jong-un’s 2019 New Year address asserted that North Korea will ‘find a new way for defending the sovereignty of the country’ if the United States fails ‘to keep the promise it made in the eyes of the world’ and ‘persists in imposing sanctions’.

Showing that he has other powerful friends, Kim visited China four times between March 2018 and January 2019 — his first visits since becoming North Korea’s leader in 2011. China, for its part, clearly wishes to show that it is still in the game on Korean Peninsula issues and will not tolerate a US–North Korea agreement that goes against China’s own interests.

Further progress on inter-Korean relations, to say nothing of US–North Korea relations, greatly depends on the outcome of the second Kim–Trump summit. The decision to hold the summit in Hanoi, and to get there via a slow train through China, suggests that Kim is closely observing the effects of economic reform on his fellow East Asian communist countries. These might serve as models for the new direction in which he wants to take his own country.

According to South Korean sources, North Korea is looking for some degree of sanctions relief in exchange for dismantling its Yongbyon nuclear facilities and allowing for international inspections. Trump has not been clear about what he wants from the summit other than for North Korea to continue to refrain from testing — he is ‘in no rush for speed’. On the other hand, Trump demonstrably wants the summit to be a success, perhaps even winning him and Kim — with whom he claims to have fallen ‘in love’ through their exchange of letters in 2018 — the Nobel Peace Prize. It is a long way from ‘fire and fury’.

Charles K Armstrong is The Korea Foundation Professor of Korean Studies in the Social Sciences at Columbia University and author of The Koreas.