The inauguration on 10 July 2017 of Democratic Party (DP) candidate Khaltmaa Battulga as Mongolia’s new president was important for maintaining political balance in a parliament dominated by the opposing Mongolian People’s Party (MPP). Battulga ran masterful anti-China rhetoric during his campaign to defeat his rival Miyegombo Enkhbold, the leader of the ruling MPP.

Battulga, a former wrestler and populist business tycoon-turned-politician who served as a member of parliament thrice from 2004–16, won Mongolia’s first-ever presidential runoff election in a highly competitive contest held on 7 July after the 26 June election failed to produce a clear winner. 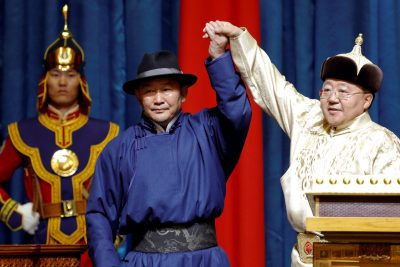 Battulga gained 50.6 per cent of the vote compared to Enkhbold’s 41.2 per cent, with a voter turnout of 60.9 per cent. Enkhbold and his party quickly conceded victory to Battulga, ensuring the continuation of the previous administration’s dynamic of a DP president serving concomitantly with an MPP-controlled parliament.

The election also witnessed a record number of protest votes, with over 8 per cent of registered voters casting blank ballots — the latest practice allowed in accordance with the Election Law of 2015. If 10 per cent of voters had cast blank ballets it would have invalidated the entire presidential election.

Although Battulga’s win can be accredited to a number of factors, they all revolve around his anti-China fervour and commitment to serving the national interest.

Since the very beginning of his campaign, one slogan that resonated strongly with the public was ‘Mongolia First’ — an allusion to US President Donald Trump’s infamous ‘America First’ motto. With this slogan, Battulga positioned himself as a strong proponent of Mongolia’s national interests.

Sinophobia, nationalism and fear mongering took centre stage in his campaign — so much so that his supporters played the ethnic card against Enkhbold by calling him an erliiz (a person of mixed Mongolian and Chinese heritage) and, therefore, allegedly not a true son of Mongolia. With the slogan ‘Mongol Ylna’ (a Mongol will triumph), Battulga promoted the notion that only he could claim Mongol origin.

Many regard his nationalist-tinged campaign as a stroke of genius, especially in wooing the younger voters who believe that resource nationalism is needed to stimulate Mongolia’s flailing economy. Due in part to China’s slowing economy and nationalistic domestic policies that chased off foreign investment, Mongolia’s economic growth in 2016 was just 1 per cent, a sharp drop from the high double-digit figure of 17.5 per cent in 2011, which was driven by a mining boom.

Mongolia is also US$23 billion in debt, more than double the size of its economy. In May 2017, the International Monetary Fund (IMF) handed over a US$5.5 billion bailout to the country amid sluggish trade with China and a drop in the price of its exports. The IMF bailout is designed to stabilise Mongolia’s economy and lessen its dependency on China.

Nationalism has been a strong force in Mongolian political discourse for quite some time now, and Battulga capitalised upon it well by exploiting anti-China sentiment. He not only advocated for state involvement in the economy and management of natural resources, but also promised to increase public access to wealth from the country’s hefty resource mining projects.

But now that Battulga has come to power, what does the future hold? By all accounts, the road ahead does not look smooth. On top of learning how to work together with an MPP-dominated parliament, managing foreign relations in line with his predecessor’s legacy of heightened global and regional visibility will be a crucial challenge for Battulga.

In a geo-strategically vulnerable situation between two influential neighbours — Russia and China — the new president is likely to face the challenge of choosing whether to remain neutral or shift towards Russia. This is especially the case given that Battulga matched his campaign hostility toward China with a pro-Russia platform. In the occurrence of a situation that favours Russia, the future of the China–Mongolia–Russia economic corridor as part of China’s Belt and Road Initiative will not be without its challenges.

Battulga’s anti-China posture has also been interpreted as a move to impress Mongolia’s ‘third’ neighbours — the United States, India, Japan, South Korea and the EU — to muster their much-needed strategic support through deeper diplomatic engagement.

But it seems unlikely that these ‘third’ neighbours will be able to significantly reduce Mongolia’s dependency on either Russia or China in the near future, particularly on the economic front. In reality, Mongolia has little option but to cooperate with the geopolitical developments in its immediate surroundings.

Then what should the strategy of the new president be? Far from having carte blanche, Battulga will have to act smartly in working with MPP parliamentarians to justify his decisions on populist domestic issues, as well as on foreign relations with both immediate and ‘third’ neighbours.

Ultimately the bonhomie between Battulga and parliament will decide his future course of action. An interesting point to observe will be how far Battulga sustains his anti-China election rhetoric and how much support he gets on this issue in parliament.

Sharad K. Soni is Professor of Mongolian and Inner Asian Studies at the School of International Studies and Deputy Director at the UGC-Human Resource Development Centre, Jawaharlal Nehru University, New Delhi. You can follow him on Twitter at @sharadksoni1.