The status of Jerusalem has been central to the Arab–Israeli dispute for more than a century. Since recognising Jerusalem as the capital of Israel presupposes the outcome of the negotiations between Israelis and Palestinians of a comprehensive two-state solution, the international community, with the exception of the United States under Trump, has refrained from doing this.

President Trump’s decision, announced in late 2017, was a radical shift in the United States’ historical position. The decision predictably drew strong criticism from Islamic states and the nonaligned world. More tellingly, it prompted adverse reactions from European states historically well versed in the intricacies of the Arab–Israeli dispute. 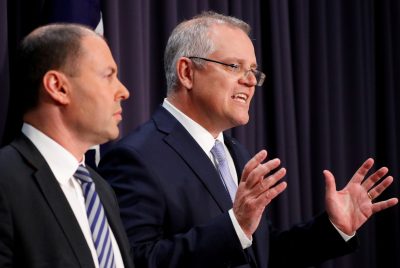 Following the US announcement, former Australian foreign minister Julie Bishop did not deviate from existing Australian policy. She noted that matters relating to Jerusalem were ‘subject to final status negotiations between Israel and the Palestinian Authority’ and that Australia would continue its diplomatic representation to Israel from Tel Aviv and its representation to the Palestinian Authority from Ramallah in the West Bank. So it came as a shock when Australian Prime Minister Scott Morrison announced that he was considering moving Australia’s embassy in Israel from Tel Aviv to Jerusalem.

Why would Australia change its stance now? The stated rationale was that Australia was going to vote ‘No’, presumably along with Trump, Guatemala and a Micronesian state or two on a UN vote that would support the Palestinian Authority as the Chair of the developing countries’ caucus group, the Group of 77. This is arrant nonsense. Australia has voted ‘No’ on a plethora of Middle Eastern questions before without shifting its embassy to Jerusalem.

As all Australian newspapers made clear, the real answer is that the announcement was a telling example of the aphorism of the late speaker of the US House of Representatives, Tip O’Neill, that ‘all politics is local’.

But at what cost?

First, the Arab–Israeli question is not central to Australia’s foreign policy and international opinion is firmly against the Australia’s new stance. It is bound to bring Australia into global disrespect. To some that may not matter, but one would hope that to those in the Australian government, Australia’s international reputation would count for something.

It will also prompt a more specific reaction from the Arab world. It is too soon to know what form that reaction will take, but there will be a reaction. In Asia, both Pakistan and Bangladesh are Islamic states and will feel forced to take positions.

But most important to Australia will be the reaction in Malaysia and Indonesia. Bilateral dealings will likely be affected. And attitudes towards Australia are set to sour. Following the Trump decision there was widespread and lengthy demonstrations in both of these countries and it would be surprising if Australia’s decision did not resonate as badly.

Indonesia is particularly sensitive to this. Israel has denied both the current Indonesian Foreign Minister, Retno Marsudi, and her predecessor, Marty Natalegawa, entry to Ramallah unless they also visited Jerusalem. They did not do this.

The timing was also unfortunate — the Foreign Minister of the Palestinian Authority was on a five-day visit to Jakarta when Morrison made his announcement.

Perhaps the biggest factor though is that Indonesia is gearing up for next year’s presidential and parliamentary elections. Islamic issues already loom large in electoral rhetoric. It would be a matter of extreme regret if the success of Morrison’s early visit to Jakarta were to be upended by his position on Jerusalem.

Indonesian President Joko Widodo is a friend of Australia. But since the blasphemy conviction of the former governor of Jakarta, Widodo has been vulnerable to charges that he is insufficiently sensitive to Islamic aspirations. He may be forced into taking positions regarding Australia he would prefer to avoid. The free trade deal with Australia that he pushed for could now be jeopardised. And the future of counter-terrorism cooperation and the regional security dialogue, which has assumed added importance with the rise of China, between the two countries is also now less certain.

This isn’t Australia’s only foreign policy blunder. Reviewing Australia’s stance on the Iran nuclear deal has received less attention, but that decision too was a serious mistake. Australia is buying into it to please Trump and the Israelis. While imperfect, the deal was regarded by former US president Barack Obama, Japan and most of NATO as holding the best hope for a non-nuclear Iran. While not party to the deal, Australia supported it. Australia had always taken nuclear non-proliferation seriously. It is a pity that it no longer seems to do so.

Morrison still has time to wind back on policies which, put simply, are bad for Australia. For Australia’s sake, let’s hope that he takes his country’s national interest seriously enough to do so.

John McCarthy is the National President of the Australian Institute of International Affairs. He previously served as Australian Ambassador to Vietnam, Mexico, Thailand, USA, Indonesia, Japan and High Commissioner to India.

A version of this article was first published here John Menadue’s blog.