Home to roughly 33 million eligible voters in the coming Indonesian elections, West Java is seeing presidential candidates Joko ‘Jokowi’ Widodo and Prabowo Subianto clash in a tough fight for votes. How well they do there may be pivotal to their quest for the presidency. 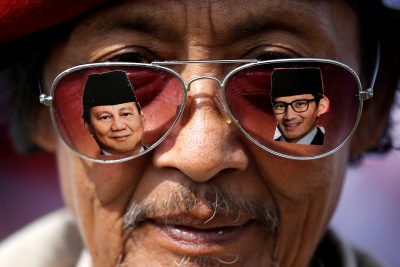 President Widodo does not want to repeat the disastrous result of the 2014 presidential election in West Java, when he lost by 4.6 million votes to his contender Prabowo Subianto. Since taking office, Jokowi has paid greater attention to West Java, primarily through several infrastructure projects in the province under the National Strategic Project flagship.

Prabowo instead focuses on Central Java — Jokowi’s home province and a stronghold of his party, the Indonesia Democratic Party of Struggle. Yet Prabowo retains a strong standing in West Java thanks to his popularity in the province, a loyal support base, devoted volunteer groups and the disciplined machinery of his party, the Great Indonesia Movement Party (Gerindra).

A separate poll by one of Jokowi’s volunteer groups indicates that his rating in West Java stands at 54.4 per cent. Third-party polling by survey institutions seems to support this claim.

But an exit poll taken after the 2018 West Java gubernatorial election tells a different story. According to this poll, about 51.2 percent of West Java’s electorate preferred Prabowo over Jokowi at the time.

It also raises questions regarding the benefit of having Ma’ruf Amin as Jokowi’s running mate. The president picked Amin to act mainly as a bulwark against such defamation. Amin’s appeal to Islamists in West Java may not be as effective as initially expected.

Going by the 2018 West Java gubernatorial election, the Prabowo camp may be confident of their electoral chances. The initially uncompetitive governor–deputy pair of Sudrajat and Ahmad Syaikhu — endorsed by Prabowo’s Gerindra and its allies — managed to defy expectations and come second among other strong contenders. But whether Gerindra could replicate the surprising results of the 2018 regional election and the 2014 presidential election is an open question.

One of Prabowo’s coalition partners, the Prosperous Justice Party (PKS), is plagued by internal strife and factionalism. Some disillusioned party members who left or were booted out of PKS formed their own political movement — the Indonesia’s New Direction Movement (GARBI). GARBI naturally attracts like-minded individuals from PKS, distracting the party from the presidential election.

Ahmad Heryawan, former governor of West Java and a prominent member of PKS, has also been summoned by Indonesia’s Corruption Eradication Commission in relation to a real estate development project. Heryawan was one of the instrumental driving forces that helped mobilise support for the Sudrajat–Syaikhu pair in the gubernatorial election.

Several other issues are vital to the presidential race.

Islam remains a dominant political force in the province — a fact both camps are cognisant of.

In October 2018, Prabowo’s running mate Sandiaga Uno and the chairman of the National Mandate Party Zulkifli Hasan visited a pesantren (Islamic boarding school) in Tasikmalaya, West Java. They praised the pesantren’s contribution to the 212 Movement that toppled the controversial Jakarta governor Basuki Tjahaja Purnama. The school has since declared its support for Uno, who is considered a young and pious leader.

Similarly, Jokowi and Amin visited a number of pesantren and paid respects to influential local clerics across the province. They had the assistance of the deputy governor of West Java, who is a descendant of the school’s founder. Influential clerics and schools have sway over the electorate as some voters look up to them for counsel.

Endorsements from influential local notables are also pivotal in shaping voters’ preferences. These elites, including renowned Islamic scholars and respected aristocratic or political figures, are political power brokers in the community.

Jokowi’s National Campaign Team, for example, has been attracting endorsements and political support from local figures — including Solihin GP, Ginandjar Kartasasmita, Agum Gumelar, as well as candidates of the West Java gubernatorial election such as Ridwan Kamil, Deddy Mizwar and Dedi Mulyadi — to secure his victory.

Finally, eleventh-hour electoral tactics, ranging from money politics to slander campaigns disseminated through social media, may impact both candidates. These tactics are generally delivered days, or even hours, before the election and will have the potency to change voters’ preferences.

Keoni Marzuki is a Senior Analyst with the Indonesia Programme at the S. Rajaratnam School of International Studies (RSIS), Nanyang Technological University, Singapore.

A version of this post was originally appeared here on RSIS.