Departing from the previous government’s opposition to Chinese assertiveness in the South China Sea, Philippine President Rodrigo Duterte has downplayed maritime disputes in favour of pursuing close economic and political ties with China. 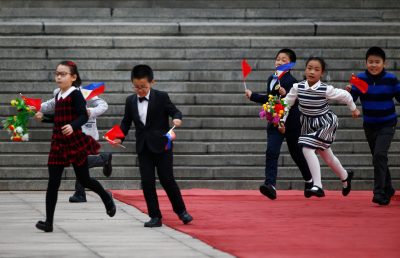 This shift has been rewarded by pledges of major fund infusions in support of Philippine infrastructure development, with a long wish list of projects now in the pipeline. Filipino fishermen have returned to their normal fishing activities around Scarborough Shoal, albeit under watch by Chinese Coast Guard.

In contrast to its past efforts to diplomatically isolate the Philippines, China now sees the Philippines as a welcome partner in its Asian Infrastructure Investment Bank and Belt and Road Initiative (BRI). China has also come around to signing with ASEAN a Code of Conduct for the South China Sea, although at best that will be a protracted process, and at worst, an exercise in futility.

While China’s island construction activities continue unabated, there have been no reports of the major provocative actions that had become almost daily media fare in previous years. No construction activities are underway on Scarborough Shoal, which some attribute to the United States and the Philippines signalling that this would be a ‘red line’ that China should not cross. Instead, bilateral dialogue between Manila and Beijing has resumed, including recent talks on the dispute itself, following Duterte’s participation in the BRI Summit.

Can relations between Manila and Beijing truly have transformed overnight, considering their hostility only a year ago? Can the two nations’ vital interests have changed so drastically that they can simply turn a new page and start on a clean slate? Or do the goals remain the same — even though the strategies took a significant turn?

Duterte’s strategy of not abandoning but de-emphasising and compartmentalising territorial and maritime issues is a wise move that can pay off if done smartly. By de-linking economic relations from management of the disputes, Manila can benefit from Beijing at a time when sustained high growth and investor confidence in the Philippines coincides with a massive investment drive by China as part of BRI. The challenge will be to see to it that China itself separates the two aspects of relations, considering that it had previously used economic leverage against the Philippines for political ends.

Duterte’s China policy shift also reduces disagreement within ASEAN over the handling of the disputes. At the same time, it forces some of the other stakeholders who were formerly free-riding on Philippine efforts to do more on the issue, thus easing pressure on the Philippines.

Security relations with the United States remain strong, being highly institutionalised, while cooperation with Japan and other countries are growing. Military-to-military contact and Coast Guard talks with China have also resumed, hopefully leading to renewed confidence-building and reduced risk of miscalculation.

So far, the policy shift’s relatively successful outcomes have relied somewhat on fortuitous developments well beyond Duterte’s control. Serendipity has played a role.

One factor was the favourable arbitration ruling itself, which is now part of international jurisprudence. Manila is as much duty-bound as China is to comply with the ruling. Aquino’s successful ‘lawfare’ opened a new platform for management of the disputes, one that the two governments should pursue if they are genuinely committed to rule of law.

The second serendipitous event was the election of US President Donald Trump. When Obama stepped down, Manila’s disputes with Beijing already ran the risk of becoming less about the former’s maritime rights and entitlements and more about major power competition. Considering Trump’s yet unclear foreign policy towards China, Beijing has reason to act more thoughtfully in the South China Sea. But because Trump’s commitment to engage in the South China Sea is also unclear, the Philippines has reason to put military cooperation with the United States on the backburner and return to a mainly diplomatic track.

The third fortuitous development for Duterte is Xi Jinping’s launch of the BRI, a bold campaign for China-led economic, infrastructure and financial connectivity that would link 65 countries from Asia, Europe and Africa. China hopes it will spur global economic growth, stimulate development in its poor frontier provinces and put its excess industrial capacity into profitable use.

The successful implementation of BRI will elevate China further into the ranks of leading countries, but it relies on China using soft diplomacy and demonstrating internationalist credentials. China would have to downplay nationalist emotions and restrain military adventurism. This could give Duterte breathing space both for repairing relations with China and reorienting the US alliance towards more convergent objectives.

While national interests may not have changed, these serendipitous changes in circumstances paved the way for adjustments in Philippine strategy in directions preferred by both Duterte and by China. If the three factors together were a spate of good fortune for Duterte, China too has serendipity to thank for the opportunity to pull back from the brink and change course. Whether China makes full use of this or not is still in question, but the opportunity is there.

Aileen S P Baviera is a Professor of China Studies and International Relations at the University of the Philippines.

A version of this article was originally published here by the Asia Pacific Pathways to Progress Foundation.

This article appeared in the most recent edition of East Asia Forum Quarterly, ‘Strategic diplomacy in Asia’.