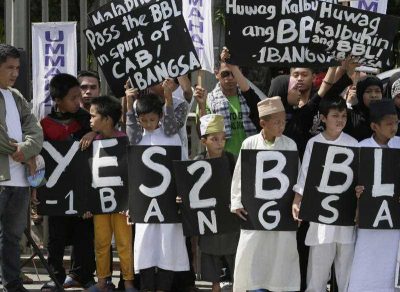 When Congress resumed BBL deliberations, it was in the form of the Basic Law on the Bangsamoro Autonomous Region (BLBAR). A House of Representatives ad-hoc committee voted 50–17 in favour of the BLBAR in May 2015. The Senate, on the other hand, was in no hurry. The Senate Committee on Constitutional Amendments and Revision of Codes reported that the BBL requires substantial revision to withstand Supreme Court scrutiny, delaying proceedings until it was too late. Senators who suspect that the BBL is unconstitutional include Miriam Defensor-Santiago and Grace Poe, who both ran for president in this week’s election, as well as Allan Peter Cayetano, Chiz Escudero and Bongbong Marcos, who are contenders for vice president.

The most significant points of the BBL are provisions for economic policies based on social justice and sustainable development (Article XIII), which were pared down in the last version. So far, land reform and creation of new industries are still in the BLBAR. But if Philippine laws and contracts such as the Mining Act of 1995 and the General Agreement on Tariffs and Trade prevail in the Bangsamoro, these provisions will either cause contradictions in Philippine law or will be relegated to mere rhetoric.

If provisions for social justice and sustainable development are only rhetorically endorsed, this will be a disservice to the struggle of the Moro peoples. A rhetorical BBL will not solve the conflict in Mindanao, and will frustrate the Moro people’s hopes for peace and development in their remaining ancestral domains.

At most, a symbolic BBL will reconfigure the power holders in the Bangsamoro while reinforcing Moro elite rule. At worse, it will fuel the recruitment drives of armed groups such as the Moro National Liberation Front (MNLF), the Bangsamoro Islamic Freedom Fighters and the Abu Sayyaf Group. The MNLF’s renewed vigour and Abu Sayyaf’s escalated extremism suggest that the BBL alone will not stop violence in Mindanao.

The push to end the conflict in Mindanao must go beyond the BBL in the next Congress. The Transitional Justice and Reconciliation Commission (TJRC) recommends ‘dealing with the past’ as a joint endeavour of the national government and the Bangsamoro authorities and institutions. Established by the Framework Agreement on the Bangsamoro, the TJRC was mandated to study and recommend steps towards reconciliation in Mindanao. Their thorough 2016 report demonstrates that with or without the BBL, historical injustices in the Bangsamoro, including land dispossession, serious human rights violations and impunity, must be addressed to provide the necessary conditions for peace in the southern Philippines.

Teresa Jopson is a PhD candidate at the Department of Political and Social Change, Coral Bell School of Asia Pacific Affairs, The Australian National University.