While the Philippines has had robust economic growth since 2010, even despite a weak global economy, it has had little progress in reducing income poverty. Recognising that some segments of society are left out in growth processes, the Philippine government has made inclusive growth the cornerstone of its most recent Philippine Development Plan. 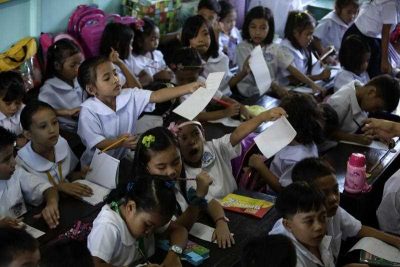 The inclusive growth strategy includes more public investments in the social sector. In particular, bigger budgets have been given to both education and health. For 2015 alone, the education budget totals 361.7 billion pesos (US$8 billion), representing an increase of 18.6 per cent from the previous year. The government has also invested heavily in a conditional cash transfer (CCT) program referred to as the Pantawid Pamilyang Pilipino Program.

Primarily a social protection program, Pantawid was originally aimed at providing social assistance for poor households on the condition that these households invest in education and health, particularly of children, and access maternal health services. Grants for education amount to 300 pesos (US$8) per child per month for 10 months of the school year (for a maximum of three children per household). For health and nutrition, cash grants per household were 500 pesos (about US$12) per month per family. Starting in 2014, the government extended assistance to child beneficiaries to enable them to finish their high school education. Monthly cash assistance for high school students were increased to 500 pesos.

This CCT has become the largest social welfare intervention that the government has ever implemented. Since its inception, the CCT budget has continued to increase, as has the number of beneficiaries. During its pilot stage, the CCT had a budget of 50 million pesos to assist 6000 households. A year later, the budget grew to 299 million pesos to assist 300,000 households. The government has continued to scale up the program toward the official estimates of the number of poor households in the country.

The 2014 budget for Pantawid was 62.6 billion pesos with over four million households being assisted. This has coincided with the extension of assistance to child beneficiaries to complete high school. According to World Bank staff, Pantawid has also become the third largest CCT program globally, next only to those of Brazil (with 8.8 million households) and Mexico (6.5 million households).

Recent official poverty data suggests that poverty incidence in the Philippines remains practically unchanged. Research shows that out of those in poverty in 2006, about a third (8 per cent of the population) had managed to exit poverty by 2009. But a tenth of the non-poor (also 8 per cent of the population) fell into poverty by 2009. Although only a 20 per cent of households in 2012 were poor, more than 30 per cent of households are strongly at risk of falling into poverty, with incomes hovering between the poverty line and twice the poverty threshold. Critics suggest that the huge budget could have been better spent in other pro-poor programs for livelihood and employment.

But the lack of poverty reduction is not necessarily the fault of the CCT. All things have not been equal. Climate disasters and other factors put nearly-poor households at strong risk of falling into poverty. World Bank staff also suggest that poverty would have further worsened without Pantawid: the official poverty rate (25 per cent in the first half of 2013) could have been 1.4 percentage points higher without the CCT. With the peso cash grant, the poverty gap index (representing the average amount of income required by the poor to reach the poverty line) has been reduced by 61 centavos.

Some think that giving money to the poor is not the best way to help since the poor may become dependent on that assistance. But studies show many positive outcomes from the CCT. Some suggest that the CCT has actually increased the desire for work of adult members of CCT beneficiaries. The same papers also show that the CCT has significantly reduced the hours worked by primary school-aged children, although it did not significantly affect the incidence of child labour.

An examination of education indicators show that the proportion of five-to-fifteen year old children in school had gone up to about 95 per cent by 2013 from 90 per cent during 2007–10. In 2008, there were an estimated 2.9 million out-of-school children, of which 1.2 million were of primary school age. By 2013, the number of out-of-school children had fallen to 1.2 million, of which 440,000 are of primary school age. So while there are still a considerable number of children who are not in school, there is clear evidence that the government’s investments in Pantawid and in higher education budgets have started to pay off.

The CCT was premised on the poor having opportunity costs in sending their children to school, and that people respond to incentives. Investing in education is not only right in itself, but it is also yielding returns. All else being equal, we can expect less income inequality and lower poverty rates in the years to come, with better income prospects for these households given the improved education attainments of children. Can we ever do wrong when we invest in the education of children?

Dr Jose Ramon G. Albert is a senior research fellow at government think tank the Philippine Institute for Development Studies, and the president of the Philippine Statistical Association, 2014–2015. From October 2012 to February 2014, he was secretary-general of the now defunct National Statistical Coordination Board.