The central domestic challenge for America in 2010 is economic. Unemployment is above 10 per cent and probably has not yet peaked, the recovery in economic activity is anemic and the massive fiscal and monetary policy responses have yet to show that they can successfully bridge to the resumption of organic activity. The recession was unprecedented in that its causes lie in the financial sector in which there is now deep risk aversion by traditional lenders and the weak recovery risks exacerbating protectionist sentiment. 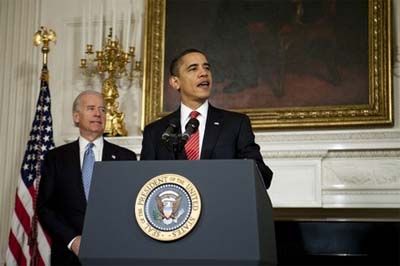 In the coming year policy makers face difficult decisions about exit: timing the withdrawal of fiscal and monetary stimulus soon enough to avoid igniting inflation but not so soon that recovery is nipped in the bud. They also face potential political firestorms over the design of a long-term strategy for fiscal consolidation (after a deficit estimated to exceed 13 per cent of GDP in 2009) and a desire by some elected representatives to hold the Federal Reserve Board accountable for the perceived laxity in monetary policy which, along with weaknesses in financial regulation, is seen to have seeded the crisis.

Fiscal consolidation will require painful choices on taxing and spending: tax cuts introduced in 2001 and 2003 which will expire in 2010 will have to be allowed to expire and an unindexed alternative minimum tax will have to be left in place; spending growth will have to be compressed in defence, education, energy and other non-social spending to allow room for growth in entitlement spending. These are difficult political decisions; if they are avoided borrowing will continue to finance the fiscal deficit and exacerbate the current account imbalance in the years ahead. A recurrence of crisis is possible if market participants refuse to finance this borrowing. An innovative political response is required to signal the necessary determination to achieve a credible plan for fiscal consolidation after 2010. A bipartisan task force consisting of congressional and administration representatives could prepare a long-term fiscal plan that is ‘fast tracked’ through the political process by subjecting it to an up-or-down vote in both houses of Congress after the2010 mid-term elections.

Despite these major domestic preoccupations the United States has engaged with Asia, most colorfully when President Obama concluded a November 14 foreign policy speech in Tokyo by describing himself as America’s first Pacific President. This speech covered a wide range of economic and political issues. While reiterating support for the Japan alliance it recognized China as a partner in addressing economic issues and North Korea. The reality is deep economic interdependence with China because of their complementary imbalances: China’s excess savings have financed US excess consumption. Both parties move to unwind the imbalances. If there was ever a case for close policy coordination, this is it. The US dollar must continue to depreciate beyond what followed the unwinding of safe haven inflows during the 2008 crisis as domestic saving rises. Chinese yuan appreciation is expected to resume in 2010 but at a gradual pace that recognizes the political complexities of the resulting relative price changes in China.

With slow US growth and high unemployment for at least another year, maintaining momentum for trade openness and liberalization is of central importance. Clearly a major signal of the necessary commitment is needed by completing the Korean-US Free Trade Agreement (KORUS) and proceeding with the US application to join the Trans-Pacific Partnership (TPP), as Obama has indicated he will do.

Follow-through in 2010 is critical. Key indicators that the United States is coming to grips with its domestic challenges and engaging the region will include the outlines of a credible bipartisan fiscal consolidation plan by mid-year, implementation of major financial regulatory reforms, completion of KORUS and moves to join the TPP. A number of Asian governments also want America to stay engaged in order to balance the influence of what will soon be the world’s three largest economies, Japan, China and India. But because the regions’ economic architecture is still evolving, most recently in the light of six Asian members now participating in the G20, the American response should be one of careful acquiescence with Asians’ preferences for any role beyond APEC membership.

This is part of the special feature: 2009 in review and the year ahead.

Wendy Dobson is former associate deputy minister of finance in Ottawa and professor at the Rotman School of Management, is author of Gravity Shift: How Asia’s New Economic Powerhouses will Shape the 21st Century.