Publication in Economics, Politics and Public Policy in East Asia and the Pacific 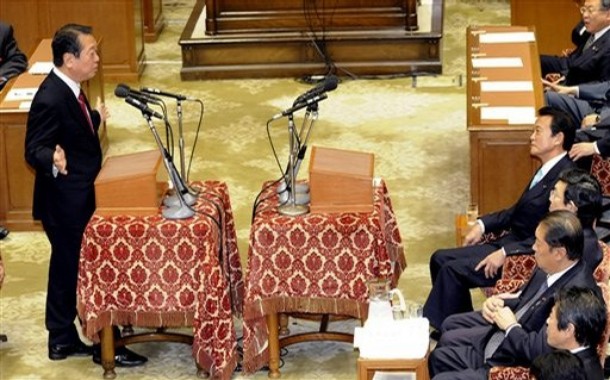 In the latest Far Eastern Economic Review [here], I examine Japan’s leadership deficit. The travails of Taro Aso and, more recently, Ichiro Ozawa, combined with the ascendance of Barack Obama in the United States have left many Japanese with leadership envy.

Prime Minister Aso himself may have a mild case of it: following the recent passage of the Obama administration’s stimulus bill, Mr. Aso admired the speed with which the new U.S. administration acted and lamented that he was unable to do the same. Similarly, in his 2006 book Ozawaism, Mr. Ozawa wrote of Japan as a ‘country without leaders’ and detailed his efforts to train future leaders in his annual workshop.

END_OF_DOCUMENT_TOKEN_TO_BE_REPLACED

Australian politicians, driven by populist imperatives, are defining the global financial crisis mostly in terms of jobs, executive pay bonuses and government stimulus packages. This approach doubtless reflects short-term political necessities and pressures.  But it is a mistake to believe this is merely an economic crisis — as serious as it may well turn out to be.

No less fundamentally, the crisis also poses potentially serious geopolitical risks to Australians. The seriousness of these security risks will depend on the depth and duration of the downturn. But they could persist long after economic recovery takes place. END_OF_DOCUMENT_TOKEN_TO_BE_REPLACED 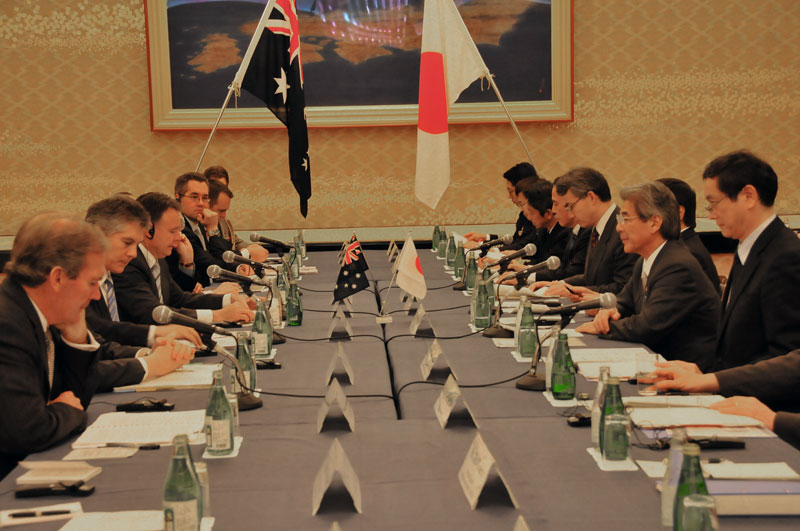 Foreign Minister Stephen Smith delivered the inaugural Crawford-Nishi Lecture in Australian-Japanese Relations to a gathering of scholars and government officials in Canberra earlier this month. Those fortunate enough also to have attended the minister’s presentation to the Japan Institute of International Affairs in Tokyo last December would have been struck by the similarities between the two speeches. Clearly they reflect current government thinking on the bilateral relationship.

What they reveal is that Labor policy on Japan is now far closer to the previous government’s policy than to its own in opposition. Rudd opposition policies have been largely overtaken by Howard-era policies.

END_OF_DOCUMENT_TOKEN_TO_BE_REPLACED 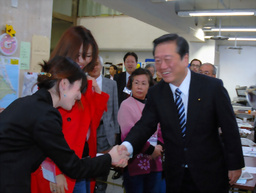 Chiba’s gubernatorial election, held Sunday, was viewed by some DPJ members going into the election as a critical test for Ozawa Ichiro’s fragile leadership of the party.

Coming within a week of the indictment of Okubo Takanori and Ozawa’s decision to hold on despite the indictment, Ozawa’s critics insisted that the Chiba election, in which DPJ-backed independent Yoshida Taira faced off against LDP-backed independent (and former actor) Morita Kensaku and three others, would measure the impact of the scandal on the electoral prospects of DPJ candidates. They would treat a defeat as a sign that if Ozawa leads the DPJ into the general election, he will gravely undermine his party’s candidates.

END_OF_DOCUMENT_TOKEN_TO_BE_REPLACED 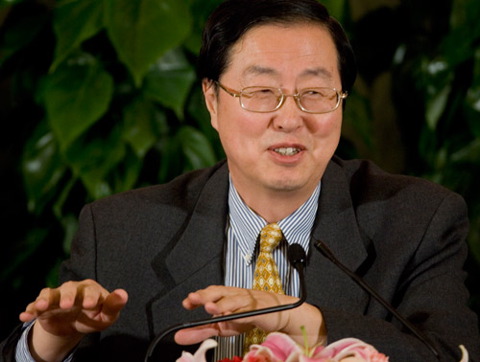 Just before the G20 Washington Summit, the State Council hastily announced a stimulus package of CNY4 trillion, about 16 per cent of GDP in 2007, to boost domestic demand. But China was much more reserved on international policy issues. This strategy was consistent with the strategy enunciated by Deng Xiaoping: focus on developing the economy but keep a low profile in international affairs. END_OF_DOCUMENT_TOKEN_TO_BE_REPLACED 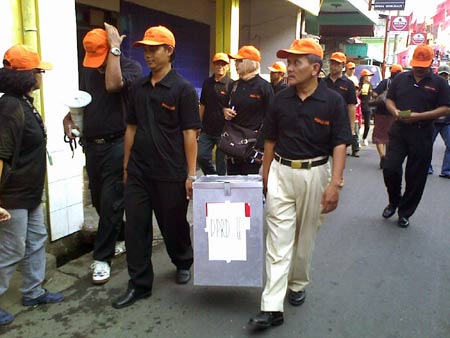 Deep in Dolly, the red-light district of Surabaya, East Java, four women were sitting patiently. Onstage next to them were two dancers in tight, low-cut spandex costumes, swinging to the beat of dangdut music, while an old crooner with bouffant hair provided the vocals.

As the women waited, light from flashing Bintang beer signs shone upon their clean, pressed clothes. Ignoring the heat of the day, more and more punters poured into this dubious café, its black walls broken only by intermittent advertisements for Guinness beer. Within a short while, over 100 people were in the café, sitting on wobbly school-style chairs or standing wherever they could find a space, waiting with anticipation and excitement.

Suddenly, it was time for the four women sitting up front to take the stage. One woman loudly addressed the standing-room-only crowd that had gathered: ‘Friends and candidates who I love, my name is Reni Astuti and I am the candidate for PKS, the Prosperous Justice Party.’ She was joined by candidates from the Democrat Party, the Indonesian Democratic Party of Struggle (PDI-P), and the Golkar Party.

Anyone who thinks Indonesian politics is boring should think again.

END_OF_DOCUMENT_TOKEN_TO_BE_REPLACED

Preferential trade agreements (PTAs) have proliferated rapidly over the past fifteen years, with more than 200 in force and many more under negotiation. It is widely agreed that PTAs are a bad way to organize world trade: their inherent discrimination is economically inefficient and they are especially disadvantageous to poor countries which lack the leverage to do good deals with more powerful trade partners.

Despite these problems, PTAs are here to stay and even if the Doha Round of WTO negotiations is eventually concluded they will continue to multiply. Throughout this process the WTO has been an ‘innocent bystander’ but should the WTO membership continue to stand idly by, the multilateral trade system will be further eroded.

This was the blunt message delivered by Richard Baldwin at a recent symposium on ‘multilateralising regionalism’. One of the world’s foremost trade economists, Baldwin has written extensively on the causes of PTAs and on the steps that could be taken to ‘tame the tangle’ of preferential trade agreements. In his address, he urged Australia to be in the forefront of advancing this agenda. Australia could do this in two important ways: first, by making its own PTAs as WTO-friendly as possible, and second, by pushing the WTO to engage with the challenge of regionalism.

END_OF_DOCUMENT_TOKEN_TO_BE_REPLACED

The Chinese Government’s rejection of Coca Cola’s bid to purchase a major Chinese juice company was based on the application of China’s new anti-monopoly laws.

It has sparked wide-spread criticism from business groups and economists who suggest such actions send a bad signal to foreign companies wishing to invest in China and may exacerbate the downturn in foreign direct investment. Arbitrary and questionable decisions against foreign investment proposals are the main justification advanced by proponents of ‘right of establishment’ clauses in international investment agreements.

While the vast majority of the thousands of Bilateral Investment Treaties (or Investment Promotion and Protection Agreements as they are known in Australia) in place around the world do not provide rights of establishment for foreign investors – almost all those to which the US is party do. END_OF_DOCUMENT_TOKEN_TO_BE_REPLACED 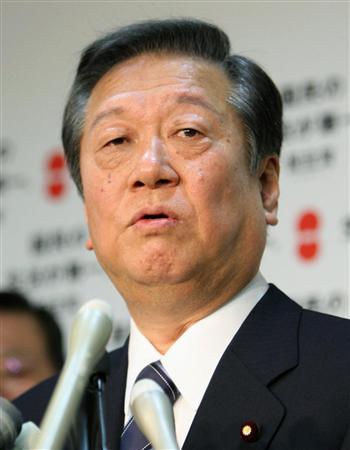 Ozawa Ichiro indicated, in a tearful press conference Tuesday evening, that he will stay on as DPJ president despite the indictment of his chief public secretary — but Ozawa’s statement may have only been the end of the beginning of the final act of Ozawa’s long career.

The press conference itself was a masterpiece of defiance. Ozawa did not give an inch, insisting on the outrageousness of the actions of the public prosecutor’s office and the lack of wrongdoing his part or the part of his secretary. He appealed to the public for support and understanding, and insisted that now as ever his purpose is to build Japanese democracy. (The press conference can be read in its entirety here, here, here, and here.)

But it is unlikely that the press conference will be the end of Ozawa’s troubles.

END_OF_DOCUMENT_TOKEN_TO_BE_REPLACED 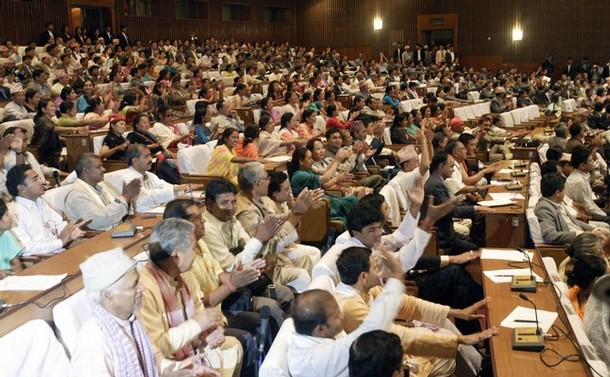 Think about the difficulties of writing a constitution for a country like Nepal. There are 103 ethnic groups, 17 officially recognized languages, and 19,000 former combatants still in cantonments. In the Constituent Assembly (CA), there are 25 political parties with no one in a clear majority, 601 members who disagree on most everything, 11 constitution drafting sub-committees, three committee rooms, and an anticipated 300,000 submissions to be read. Plus, barring public holidays, there are about 330 days left to complete the job.

END_OF_DOCUMENT_TOKEN_TO_BE_REPLACED 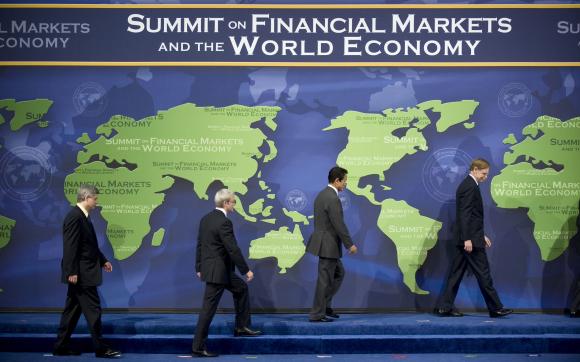 The G20 agenda seems oddly out of line with the way the global economic crisis is affecting most G20 members. At their November 2008 meeting, leaders thought of this as a financial crisis – and mostly confined to the G7 economies. The crisis was a landmine that the US and European economies had stepped on. As the landmine had been planted by US and European financial markets, the non-G7 members Brazil, India, China, South Africa and other emerging nations seemed only indirectly concerned.

In the past six months, the ‘landmine crisis’ has become a ‘cluster-bomb crisis’ – throwing recession-inducing projectiles in every direction. The Washington declaration matched G7 priorities in what was then mostly a G7 problem. Working with the declaration as a blueprint for the London Summit is no longer good enough. The emerging economies are now directly implicated; their economies are being damaged by a decade of G7 governance failures in financial markets. This changes the type of political guidance that is needed from the G20.

END_OF_DOCUMENT_TOKEN_TO_BE_REPLACED 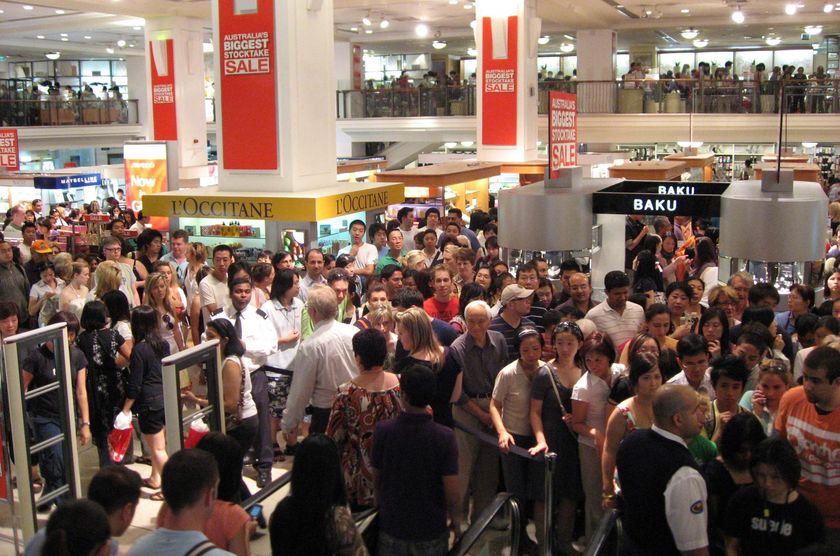 The former Chair of the Australia Competition and Consumer Commission, Professor Allan Fels, co-authored a column for the Weekend Business section of the Sydney Morning Herald entitled ‘Rudd’s Consumer Activism Over the Top’ (21-2 March 2009, p 5) . Their title is misleading, although they raise some good points in response to Treasury officials’ latest Consultation Paper, ‘An Australian Consumer Law: Fair Markets, Confident Consumers’. On its own terms – let alone compared to developments over recent years in the EU, Japan, and soon Canada – the Paper and the Australian Governments’ current proposals remain a disappointment for Australian consumers.

Yet now should be a perfect opportunity, however belatedly, to implement a better consumer regulatory framework and thereby revive consumer trust. After all, partly through cash handouts to consumers, Australia is trying to spend its way out of a huge recession, itself caused (or at least exacerbated) by regulatory failures and increasingly blind faith in improperly regulated markets. END_OF_DOCUMENT_TOKEN_TO_BE_REPLACED 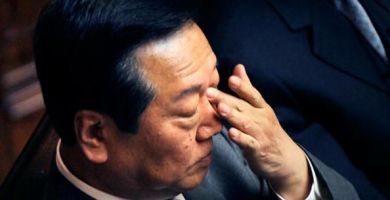 There is something old and something new about Ozawa, his secretary Okubo and the latest money politics scandal in Japan.

First, the old: this scandal shows:

● how Japanese Diet politicians continue to sub-contract out the task of raising political funds to their secretaries who became the primary target if a scandal ensues. The secretaries are still playing the traditional role of ‘fixers’ and ‘filters’ – ‘fixing the big money deals while filtering the activities so that ‘while money flows through the door, the boss never has to swim in it’*; 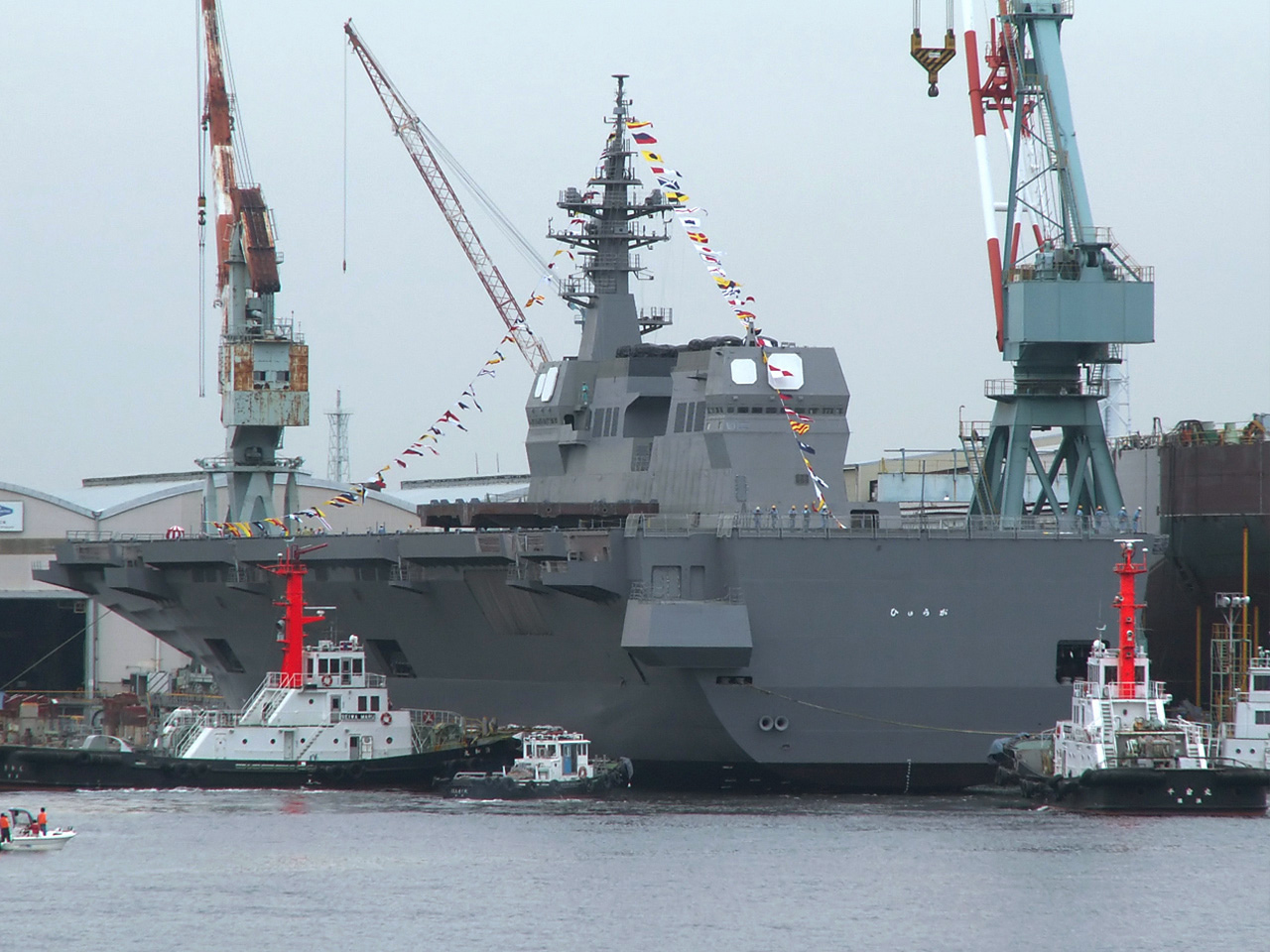 Forbes and AP have run nearly simultaneous articles reviving the “Japan rising” meme that I thought had died with Abe Shinzo’s government.

Tim Kelly of Forbes uses the occasion of the commissioning of the Hyuga — previously mentioned in this post — to argue that the launch of Japan’s ‘first aircraft carrier since America dismantled the Imperial Navy a half century ago’ is a landmark in Japan’s ‘[creeping] away’ from pacifism.

Eric Talmadge, meanwhile, uses the trick of reporting on a US-Japan joint military drill to argue that Japan’s military is assuming a ‘more global role.’

END_OF_DOCUMENT_TOKEN_TO_BE_REPLACED 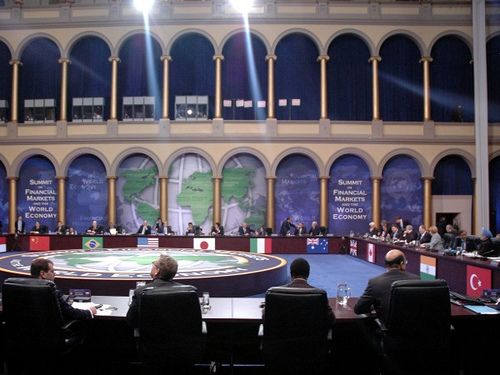 There is a flurry of international activity as we approach the G20 London Summit on 2 April. The sherpas, sous sherpas, and think tankers are all attempting to formulate an approach that could result in the summit producing a substantive communiqué addressing the crisis.

The G20 process started in 1998, as an informal gathering of finance ministers and central bank governors in the wake of the Asian crisis. The first Summit in Washington on 15 November seemingly transformed it overnight into the principal global institutional mechanism for addressing practically all that currently ails the world. The first summit also spawned four working groups, each with two co-chairs, which are expected to submit their recommendations to the London meeting.

END_OF_DOCUMENT_TOKEN_TO_BE_REPLACED

Next Page »
As a freely accessible resource for the region, East Asia Forum relies on donations from those who believe in its importance. More information.